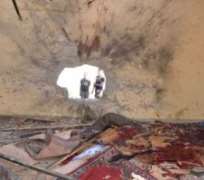 A suicide bomber killed at least nine people and injured around 12 others on Friday in an attack on a mosque in northeastern Nigerian Damboa during early morning prayers, a military source said.

No group has claimed responsibility for the attack in the town of Damboa, which is in Borno state, but it bore the hallmarks of Islamist militant group Boko Haram.

A member of a grassroots civilian joint task force set up to defend local people against Boko Haram also confirmed Friday's attack on the mosque. (Reuters)