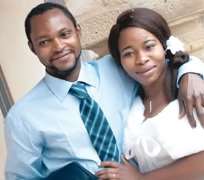 A man has been arrested by Italian police investigating the killing of a Nigerian immigrant which the government has condemned as a racist attack.

Police say a row broke out at Fermo on Italy's west coast when racist abuse was hurled at the partner of Emmanuel Chidi Namdi, 36.

The violence escalated when a traffic pole was pulled from the ground. The victim later died in hospital.

BBC revealed that a local man described as a well-known 'ultra' football fan is being held.

Amedeo Mancini, 35, was arrested on Thursday on suspicion of racially aggravated manslaughter. His lawyer said he 'did not mean to kill' and that he had punched the Nigerian in self defence.

Emmanuel Chidi fled Nigeria with his partner Chinyere, 24, after their families came under attack from jihadist group Boko Haram.

Their families were killed in an attack on a Nigerian church in 2015, Italian media reported.

As the couple made their way across the Mediterranean, their baby died.

They finally arrived in Fermo last November and were taken in by a local Christian charity. They had a wedding ceremony in January, conducted by local priest Father Vinicio Albanesi, which was unofficial because they had lost their documents, Rai TV reported.

What happened on Tuesday evening is unclear. However, it is thought that the attacker subjected Chinyery to racist chanting and then grabbed her.

At that point the traffic pole was pulled out of the ground as Emmanuel Chidi and his attacker came to blows. He was taken to hospital in a coma but never recovered.

Local churches which have worked with migrants have recently been targeted by small bombs, according to Father Vinicio Albanesi.

Prime Minister Matteo Renzi was among many across Italy who took to social media to express disgust at the killing, using the hashtag Emmanuel.

'The government today is in Fermo with Don Vinicio and the local institutions in memory of Emmanuel. Against hate, racism and violence,' he wrote.

Visiting the town, Interior Minister Angelino Alfano told reporters on Thursday that the seed of racism had to be stopped before it could bear fruit. 'The heart of Italy isn't represented by those who carried out this murder.'

He also announced that Emmanuel Chidi's partner Chinyere had been granted refugee status.