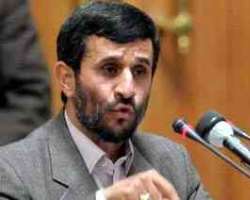 'The onus is on Iran to clarify the doubts and concerns about its program,' The Associated Press quoted the UN chief as telling the delegates from 189 nations.

He called on the Tehran government 'to fully comply with Security Council resolutions' demanding that it halt enrichment, which Washington and others contend is meant to produce the nuclear fuel for bombs in violation of Iran's NPT obligations.

Ahmadinejad was the only head of state participated in the session.

Departing Tehran on Sunday, the Iranian leader made clear he would assail United States-led efforts to impose a new round of UN sanctions on his country. 'Under the pretext of prevention of nuclear weapons proliferation, they impose heavy pressures on independent countries,' Ahmadinejad complained to reporters.

He was also expected to counter with a denunciation of the United States and other nuclear-armed nations for their slow movement toward disarmament. 'The atomic bomb has become a tool for bullying, domination and expansionism,' he said Sunday.

US Secretary of State Hillary Rodham Clinton, following Ahmadinejad to the UN stage later Monday, suggested over the weekend he was coming to New York 'to divert attention and confuse the issue.'

'We're not going to permit Iran to try to change the story from their failure to comply' with the NPT, she said on Sunday's 'Meet the Press' on NBC.

While delegates assess the state of the NPT in UN conference halls, American and European diplomats will be working elsewhere to reach agreement with the sometimes reluctant China and Russia on a fourth round of UN Security Council economic penalties to impose on Iran.