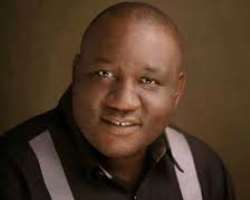 Benjamin Uwajumogu is a former Speaker of the Imo State House of Assembly who contested the 2015 Senatorial election but failed woefully. He is currently warming up for the July 23 Imo Senate rerun election. He has worn out two pairs of Rockport shoes strolling door to door, tieless, speaking sweet talks to people of Okigwe zone, including Ihitte Uboma his home town, hoping to be taken seriously.

Many APC supporters from the zone said they would not back him “Asking me to vote for Uwajumogu is like asking a Christian to vote for Satan instead of Jesus,” an APC supporter posted on Facebook ..The stench of past scandals is haunting him as allegations regarding his activities as Speaker fester.

I am not from Okigwe zone but as an Imo man I must confess that I am not one of his fans. When Uwajumogu was the Speaker of Imo House of Assembly he dealt with what seemed like an endless supply of ‘Imo tax payers money’. From June 2011 to May 2015 he connived with the governor of Imo state to siphon local government funds. He also supported the sack of 10,000 Imo workers.

It was also during his tenure as Speaker that this suffering of Imo people began. It is on record that high catalogue of withdrawals, misappropriation, disregard to public procurement rules, disregard of court rulings happened when he was Speaker . He connived with Ali Baba , aided and abetted gross financial impropriety in Imo . There are so many things to talk about. What about the abortion bill?

As a world-class liar that he is, Uwajumogu tried to distance himself from the sack of the 10,000 workers but we know the truth. We know the truth about this man who is the most corrupt person ever to handle the position of speaker of the Imo State House of Assembly. We know much about this failed Speaker who should not be trusted with leadership position anymore. When he was Speaker he perfected the politics of personal profit and theft. Wherever he goes, whatever he does , truth was trashed and criminal conduct followed him like night follows day. That is why we named him the Bertie Smalls of Imo State. His former Media Aide Ikenna Samuelson Iwuoha revealed how he looted millions of Imo tax payers money .

Uwajumogu ran the Imo State House of Assembly like his own personal hedge fund doing favors to other thieving cables and many others and really many, many others in exchange for cash, pure and simple.There’s another dimension to his chronic crookedness, and it gets insufficient attention even though it is important we look deeply into it. Three of his aides were assassinated and a fourth one escaped assassination. Nobody asked why . But I am still asking who killed these men? One day the truth will come up.

It’s self-delusional to believe that a stint in the Senate would make Uwajumogu a better person. Power exacerbates rather than cures an absence of integrity. Now that he is jobless he is seeing what 10,000 persons and their families that he and the emperor took food away from their mouth saw. His calls are no longer answered by those who hitherto held him in high esteem. He is now viewed as a liability.. He now has to hire transport for his family, pay all his phone, rent, electricity expenses. He is now in dire financial straits. His huge mansions with multiple self contained bedrooms and cars have become a liability . I tell you all those that contributed to the sufferings of Imolites one way or the other will be shown the backhand .

Disclaimer: "The views/contents expressed in this article are the sole responsibility of the author(s) and do not necessarily reflect those of The Nigerian Voice. The Nigerian Voice will not be responsible or liable for any inaccurate or incorrect statements contained in this article."
Articles by Kenneth Uwadi
20-7-2017  Imo And The Anger Of The Unknown Servant (part 1)5-4-2017  My Friend Jack And The Imo Governor Hopeful4-11-2016  Imo Chief Of Staff And The Dance Of Tortoise2-7-2016  Free Emeka Ugwuonye Now!7-6-2016  Who Will Save Imo From The Hands Of Governor OkorochaMore...