Oil prices edge up as Brent pushes further above $50 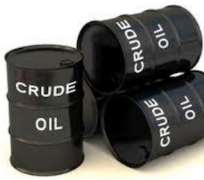 Crude prices edged up in Asia on Monday, building on recent gains with Brent holding above $50 after Nigerian militants claimed fresh attacks on the country's oil infrastructure.

At about 0630 GMT, US benchmark West Texas Intermediate was up 33 cents at $49.32, while Brent rose 35 cents to $50.70. Analysts said trading would likely be light Monday owing to the Independence Day holiday in the United States.

The commodity rallied at the end of last week as news filtered through of an attack on a restaurant in Dhaka, which compounded worries about terrorism days after suicide bombers hit Istanbul airport.

On Sunday a Nigerian rebel group claimed five attacks on the country's oil and gas infrastructure, threatening to scupper efforts to boost production.

The Niger Delta Avengers have been bombing pipelines in a bid to win the delta region a bigger share of crude revenue and political autonomy. The attacks have hit output from African largest oil producer.

'Things look better one day and worse the next day.'

EY Services oil and gas analyst Sanjeev Gupta dealers were keeping an eye on the release Friday of US economic data, including on employment in the world's top oil consuming nation. – AFP.