Mass Demolition Of Houses In Owerri: I Wiil Not Obey Constitution—Gov Okorocha 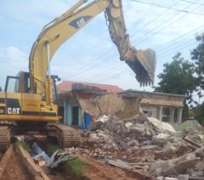 The Imo State Governor Owelle Rochas Okorocha has declared that he would not follow constitutional provisions to demolish people’s houses and property in Owerri.

The governor made this declaration through his media spokesman Mr. Sam Onwuemeodo while answering questions on the current mass demolition of structures for road expansion in Owerri anchored in a phone-in radio programme by Hot F.M Radio Owerri.

‘There is a reason behind every action. The aim of the ongoing massive demolition of structures in Owerri is to make Owerri look fine and people will benefit. If the Imo State Government follows due process and the law in doing that, it will not achieve its aim…’.

In reaction, some executives of the Owerri Chapter of the Nigerian Bar Association (NBA) led by its chairman, Barr. Lawrence Nwakaeti who featured in the radio programme said that it was clear that the governor was due for impeachment for disregarding the same constitution which brought him into power and which he also swore to obey.

‘The structures being demolished have government approvals and many of them existed even before the creation of Imo State. If government is to change its development plans and wants to acquire people’s land, the constitution, Land Use Act and other relevant laws provide that a notice in writing be served on owners of the property stating reasons for the acquisition which must be for overriding public interest. Thereafter development on the property is evaluated and compensations paid accordingly.. All these the government never did but it has continued to arbitrarily destroy people’s houses and structures unilaterally. The governor should also remember that it is the same constitution that made him governor that he is now disobeying. Well, since the governor through his media man has made it clear that he would not obey laid down constitutional and legal provisions on the demolition exercise, then the governor is openly inviting anarchy in Imo state and it is an impeachable offence.….’ Nwakaeti decried.

Speaking further, Barr. Nwakaeti described Mr. Onwuemeodo’s statement on the issue as careless, uncivilized, provocative and possible of provoking break down of law and order in the state. He however, called for his immediate resignation and sack.

The association nevertheless vowed to fight to protect the citizens of the state against Governor Okorocha’s alleged oppressive policies, ruthlessness and illegalities in the state.

Many people who called in during the programme commended the association for the outing and urged the government not to allow the exercise to cause break down of law and order as a result of the demolition exercise.

Others who featured in the programme were the Secretary of the branch, Barr. Ismael Nkwocha and his counterpart for publicity Barr. Eke Onyeforo.