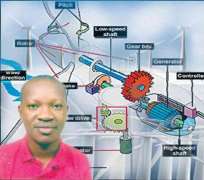 MR ASUQUO
The poor power supply in the country has made the generation of alternative source of energy from wind inevitable in Nigeria inspite of the advanced technology required.

The total amount of economically extractable power available from the wind is considerably more than present human power use from all sources, as not all the energy of the wind flowing past a given point can be recovered.

Wind power is the conversion of wind energy into a useful form of energy, such as using wind turbines to produce electricity. An estimated 72 terawatt of wind power on the earth potentially can be commercially viable, compared to about 15 terawatt, average global power consumption from all sources in 2005.

The Managing Director, Asuit Limited, a solar and wind extraction company, Mr. Asuquo Asuquo, says that the business of wind energy for generation of electricity in Nigeria is not given adequate attention probably because of the advanced technology and huge capital required.

He says N500,000 will be required to start the business at a small scale level while between N5m to N10m will be needed at a middle scale level depending on the capacity of the wind turbine, adding that other variables to be considered include inverter, backup systems, accessories among others.

On the number of workers required to start at a small scale level, he says one or two workers will be okay, while at least ten qualified workers and well trained engineers will be needed to commence at a medium scale level.

He says the business owner should know the principles of operation of the wind turbine and the various components that should be connected for the electricity to be delivered to enable him manage the business efficiently and effectively.

On the equipment needed for the business, he says it includes wind turbine, inverter, backup systems, charge controllers, cables and other connecting accessories.

Asuquo says that most raw materials used for the business are sourced from the local electronics markets or companies that provide the services, adding that all the raw materials can also be imported.

On the installation or the wind turbines, he says for domestic or private use, it can be installed on a pole above the ground and if it is on a story building, it can be installed on the roof top to allow free flow of air, adding that if it is for an industrial/community use where more than five wind turbines are required, about half plot of land may be needed for the installation.

Asuquo says the challenges facing the business include awareness, huge initial cost of installation that customers have to pay and the huge cost of acquiring raw materials and equipment for the job.

He says that the mass media can help in spreading the news about wind energy, urging Banks to also grant cheap loans to companies that are into renewable energy to assist them complement the effort of Power Holding Company of Nigeria and the government.

'Apart from these challenges, the technology of wind electricity is a proven technology. It works even for a whole community and when once installed does not require frequent maintenance and above all, it can work anywhere and everywhere there is atmospheric air or wind. It does not need any form of fuel apart from air. It is noiseless in operation and does not require any to manage its operation,' he says.

According to windeis.anl.gov, mechanical power can be used for specific tasks (such as grinding grain or pumping water) or a generator can convert this mechanical power into electricity to power homes, businesses, schools, and the like.

It states that wind turbines, like aircraft propeller blades, turn in the moving air and power an electric generator that supplies an electric current, adding that a wind turbine is the opposite of a fan, as instead of using electricity to make wind, like a fan, wind turbines use wind to make electricity. The wind turns the blades, which spin a shaft, which connects to a generator and makes electricity.

Horizontal turbine components include blade or rotor, which converts the energy in the wind to rotational shaft energy; a drive train, usually including a gearbox and a generator; a tower that supports the rotor and drive train; and other equipment, including controls, electrical cables, ground support equipment, and interconnection equipment.

It states, 'Wind turbines are available in a variety of sizes, and therefore power ratings. The largest machine has blades that span more than the length of a football field, stands 20 building stories high, and produces enough electricity to power 1,400 homes.

A small home-sized wind machine has rotors between eight and 25 feet in diameter and stands upwards of 30 feet and can supply the power needs of an all-electric home or small business. Utility-scale turbines range in size from 50 to 750 kilowatts. Single small turbines, below 50 kilowatts, are used for homes, telecommunications.'