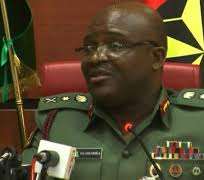 According Naij.com, the former army chief was arrested Tuesday night by the operatives of the Nigerian secret police in his residence in Maitama Abuja.

His arrested  is said to be  in connection with arms deal probe involving former national security adviser, Col. Sambo Dasuki.

The Nation reported Tuesday that arms scandal panel  had also summoned over 292 serving and retired top officers who worked with the three former Army chiefs. The panel was quoted as saying that the invitation was in line with its mandate to look into procurement of arms, ammunition and equipment from 2007 to 2015.

The committee, with the mandate to probe procurement of arms, ammunition and equipment from 2007 to 2015, has also asked more than 10 local and foreign companies, including the Defence Industry Corporation of Nigeria to appear before it.

Chairman of the committee, Air Vice Marshal Jon Ode, had asked the Nigerian Army Headquarters to direct all the officers to be present at the panel.

The panel's letter to the Army Headquarters said: “The invitees are required to clarify issues arising from procurement between 2007 and 2015 before the committee sitting at the ONSA daily.

“AHQ is required to cause the appearance of the senior officers and CEOs of the companies before the committee on dates stated against their names. Your cooperation will be most appreciated.”

Although some serving Army Generals are expected to appear before the panel, their names are being kept under wraps “for strategic reasons”