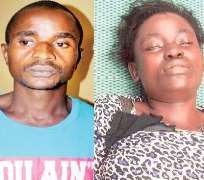 Onyekachi Anele, 36, is prob­ably gnashing his teeth in regret, in the custody of the police at the headquarters of the State Criminal Investigation Department, SCID, of the Imo Police Command, Owerri.

As he ponders over what the future holds for his four-year-old daughter and one-year-old son and the stepson who is at the centre of the fate that has befallen the family, he is equally learning, in a hard and unfortunate way, the meaning of what the bible says: 'The devil goes about like a roaring lion seek­ing who it may devour.'

Anele who lived with his family in Obibiezena in Owerri North Lo­cal Government Area, is also wish­ing that he had restrained himself when the devil pushed his wife to stir up anger in him, not long after he returned home from vigil held at Jesus Disciples Fellowship.

Sunday Sun learnt from the Imo Commissioner of Police, Mr. Taiwo Lakanu that trouble began on June 1, 2016, when Anele's wife, 32-year-old Chikodi, asked him to give her son from an earlier marriage, N100 to take to school.

Taking up the tale, Anele said: 'I got married to my late wife Chikodi Anele over four years ago. She had a son for another man before we got married. We have been living together in peace. We have two children. Our first child, a girl, is four years old while the second child is a boy, who is just one year old.'

He continued: 'On May 31, 2016, I went to my church, Jesus Disciples Fellowship, where we had a vigil. I came back around 5: 30 am and started playing Christian music. My wife came to where I was and said that I should give my stepson N100 naira to go to school. I told her that I had no money with me.

'You see, my late wife was hypertensive; she became very an­gry that I did not give my stepson N100. She started to insult me. I got angry and slapped her.

She slapped me in return. I was shocked by her effrontery and slapped her a second time. She fell down and fainted.

'I rushed her to City Hospital, Nekede. On getting there, the doc­tor checked her and confirmed that she was dead. I went to the nearby police station at Umuguma and reported the matter to the police and they arrested me,' he said.

Promptly, the case was trans­ferred from Umuguma Police Station to State Criminal Investiga­tion Department, Owerri, the Imo State capital, where he has been in detention as investigation into the matter was in progress.

The officer-in-charge of the ho­micide section of the SCID, Supol Innocent Obi, further revealed that family members of the deceased had not yet been to the police to know the state of the matter. He stated that Anele had not yet informed them.

In anguish, Anele, told Sun­day Sun: 'I love my wife. I had no intention to kill her. It was misunderstanding and annoyance that prompted me to slap her and she died. Up till now, it looks like a dream and a mystery to me.

When Sunday Sun visited the compound where Anele lived with his family before the unfortunate incident happened, his neighbours were still in shock.

One of them, Chukudi Eneka said, 'They both loved each other; they were a good family. The devil just caused this thing. Suddenly we heard them quarrelling. The husband slapped the wife and the wife slapped him back. The hus­band then slapped her again. She fell down and fainted. We thought it was a joke. When she was taken to the hospital, the doctor said she was dead. We are shocked over the incident.'

In what appears like a case of Anele being abandoned to his fate, the Deputy Commissioner of Po­lice in-charge of the State Criminal Investigation Department, Mr. Hafiz Inuwa said that the kinsmen of Anele had not been to see him in the custody of the police, but add­ing that the corpse of the deceased was still in mortuary.