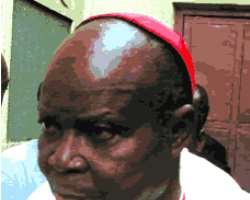 One of our most celebrated Bishops of the Catholic Church in Nigeria, His Lordship, Most Rev. Dr Edmund Fitzgibbon, passed away on April 16, 2010, in his home country, Ireland. He was 85 years old.

He came to Nigeria in 1949 as a young priest bubbling with energy and zeal as he rode his Hercules motorbike in the villages. But for rare holidays abroad, he laboured for fifty-five years in Nigeria and literally burnt himself out working for his Lord and promoting the Gospel.

He rose to become Bishop and, among other places, he served in Minna, Calabar, Port Harcourt and Warri before retiring in St. Agnes Church, Maryland, Lagos.

Although he was supposed to have retired, Bishop Fitzgibbon was more or less like an auxiliary bishop to Anthony Cardinal Okogie since he absorbed many duties in the Ikeja Deanery, particularly in the administration of the Archdiocesan Marian Shrine where he was ubiquitous in Marian devotions. He presided over the First Saturday devotion (A Day with Mary), the three principal novenas in preparation for the three major feasts of the Blessed Virgin Mary, namely, the Annunciation in March, the Assumption in August and the Immaculate Conception in December.

Cardinal Okogie is usually the chief celebrant on these major feast days at the shrine, but it was Bishop Fitzgibbon, assisted by Rev. Fr. Raphael Adebayo, Parish Priest of St Agnes Church, that usually led the well-attended novenas. He referred to the lay Marian devotees who regularly trooped to the shrine as “my novena people.” On Monday, April 19, while Bishop Fitzgibbon was being buried at the headquarters of St. Patrick's Missionary Fathers, Kirkegan, Ireland (his congregation), a requiem Mass was also celebrated at the Marian shrine to intercede for his loving and gentle soul.

At homily, moved by the words of Fr. Clement Abiodun, as he recalled the great qualities of the late Bishop, many of us struggled to suppress tears of love. We had come to adopt the prelate while he lived with us as father, counselor and confessor.

Fortunatus, well-known at St. Agnes for devotedly controlling and coordinating parking of devotees' cars at major Marian events, described Bishop Fitzgibbon as “a man whose humility appeared infinite as he always came down to the level of anyone who approached him”. Famous broadcaster and Marian apostle, Patrick Oke, said the Bishop was “a spiritual revolutionary”.

Personally, I recall that from our first meeting, I immediately knew that he was a man of God that I needed to cultivate.

When we were introduced in 1998, shortly after he took residence at St. Agnes, it happened that he had been reading my articles in This Day, The Guardian and other newspapers. He was a voracious reader. It is always gratifying to learn that notable leaders in society read the opinions of smaller personalities like me. Dr. Nnamdi Azikiwe and Chief M.K.O Abiola were among very important personalities that had been reading my humble views long before I met them.

The tremendous power of writers as opinion moulders is unfathomable. Bishop Fitzgibbon took particular note of some of the salient aspects of my Christian views. I once wrote in connection with fornicating priests that, if they repented, God would forgive them and that Heaven would be their reward. But what struck the bishop as profound was my inspired statement that those priests who preserved their virginity would enjoy far greater heavenly bliss as a due reward for all holy virgins.

The simple reason I advanced this is that God who created the pleasures of the lower region of the body is far more capable of providing unimaginable heavenly joys for holy virgins, particularly priests and the religious. As St. Paul states to the Corinthians, it has not been given to any mortal to imagine what God has in store for those who do His will on earth. How can one compare sexual orgasm and the passing effects of fine wines or pure cocaine and heroin with the unending and different heavenly ecstasies, fragrances and flavours in the presence of the Beatific Vision?

As Fr. Abiodun well-captured in his homily, the greatest spiritual assets of Bishop Fitzgibbon include his enviable Marian devotedness, his fidelity to the Pope, his countless hours at the confessional and admonitions of the youth and the sick. Like all great Saints of the Church, he had a most tender love for Christ's Mother and believed that any Christian who sincerely attached himself or herself to Mary would never be detached from Heaven where Our Lady is firmly entrenched as Queen.

On the Holy Father, he always carried any literature or apostolic letter arriving from the Vatican as if he was in possession of rare treasure, making sure that all of us, his spiritual children, each got a copy. He spoke to all who would listen about fidelity to the Pope and praying for him as one of the best ways of loving the pilgrim Church and pleasing God.

But it was his energy-drenching hours at the confessional, disregarding lunch hours, that probably stands him towering above his peers. He was always there at the Marian Shrine from morning till evening and even when he retired to his spartanly furnished and unguarded bungalow, many followed him there. I was one of those guilty of this hounding of His Lordship but he never complained or stopped the endless visitors.

I discussed the most intimate aspects of my life with him, in full realization that it was Christ, as in the seven Sacraments of the Church, that spoke through him. It is the same blood and water that cascaded from Our Blessed Redeemer's Sacred Side that pours out at confession. One of the most rewarding penances I received from Bishop Fitzgibbon was when he asked me to say the Our Father meditatively for fifteen minutes. It was a great experience in prayer.

Finally, it should be noted that Bishop Fitzgibbon was a fearless apostle of truth. He looked boyish and incredibly pure and holy as one looked at his glowing face, but behind that tender mask was a man of tremendous courage. As Bishop, he was given a hard time by some natives in Port-Harcourt and Warri, but he stood his ground, especially in Warri, when forces of parochialism, clannishness and tribalism tried to intimidate him or to bluff their way through laid-down ecclesiastical matters and procedures.

He proved to them that he was veritably a Nigerian.

In his crisp and clearly pronounced English, heritage of his rich family background and education, he always proclaimed the truth but in a gentle and loving manner. It was Archbishop Okogie's fraternal love that kept Bishop Fitzgibbon for as long as he stayed at St. Agnes (1998 - 2005) but it soon became too glaring that he might just faint and die suddenly from long hours of priestly service.

The Cardinal and Rev. Fr. Adebayo had to pick up the courage to wrench him from the pestering of his spiritual children and sent him back to Ireland for deserving final days of rest, private reflection and prayer. How much he must have missed Nigeria, his adopted country where he had grown up to love the people both in the North and South, our food and climate and other aspects of this country that so many foreigners have also come to cherish.