Obama goes on counter-offensive against Trump 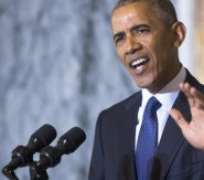 President Barack Obama speaks on the Orlando shooting at the Treasury Department after convening with his National Security Council on June 14 in Washington, D.C. | Getty

The short version of what President Barack Obama said Tuesday: Donald Trump is an idiot.

The slightly longer version: The presumptive Republican nominee is a dangerous manipulator who's either willfully or ignorantly out to damage the country and put more Americans in danger, all for the sake of propelling a brand of politics that responsible Republicans know they can't support.

Story Continued Below
As Obama himself put it — a day after Trump breached whatever was left of nonpartisan respect for the office of the presidency by using his role as the party's standard-bearer to suggest the president is sympathetic to terrorists — the Republican's Muslim immigration ban and other proposals would destroy the pluralism that makes “this country great, and then the terrorists would have won. And we cannot let that happen. I will not let that happen.”

That razor-sharp response is what Obama's campaign for Hillary Clinton, fought on national security terms in the wake of a terrorist attack that is the deadliest shooting in American history, looks like: an attempt to juxtapose the politics of seriousness against the politics of fear, and a demand that voters realize how much damage Trump has done just by being in the race.

What Trump said Monday was written off by weathered observers as just another day on the campaign trail, but it really was a new frontier: Trump's nudge-nudge, metabirther Obama accusations, followed immediately by his one-time campaign staffer and now insistently unpaid adviser Roger Stone's allegation that top Clinton aide Huma Abedin is a Saudi terrorist agent, which the Manhattan mogul then topped with a “they”-filled speech studded with casual slanders and pointed lies.

In response, Obama went significantly further than he has before, and he then threw down a challenge to the rest of Trump's party, who had spent the past day and a half dodging reporters trying to pin them down on Trump's views: “Do Republican officials actually agree with this?”

(“Muslims are our partners,” said House Speaker Paul Ryan at a news conference Tuesday morning, while joining the attacks on the president for not doing enough to deal with the “radical Islam” threat and sticking by his Trump endorsement.)

Obama's time on the trail for Clinton was officially supposed to begin Wednesday in Wisconsin, a rah-rah celebration of all the reasons he's with her, full of hugs and smiles for the cameras and campaign commercial B-roll.

Orlando scrapped those plans. In the wake of Trump's response, Obama turned a sober review of his administration's antiterrorism efforts and the investigation into the Orlando attack following his scheduled meeting with the National Security Council into his most searing attack yet on Trump. More than just not being serious enough for the job or saying disturbing things, Obama said, the Republican has tipped into a new phase that will result in death and chaos — all for the sake of tweets and cable news coverage.

And Clinton, speaking in Pittsburgh, was right on the same page — though the White House and her campaign deny there was explicit message coordination that led them both to land at the same time, on the same themes and even in some of the same words (“there's no magic to the phrase 'radical Islam,'” he said, at almost the exact moment Clinton said Trump is “fixated” on “magic words” that are supposed to stop the threat).

The problem with Trump, Obama said, isn't just what he's missing. It's the toxins he's putting into the political conversation with all his “yapping.”

“We are starting to see this kind of rhetoric and loose talk and sloppiness about who we are fighting, where this can lead us. We now have proposals from the presumptive Republican nominee for president of the United States, to bar all Muslims from immigrating into America. We hear language that singles out immigrants and suggests entire religious communities are complicit in violence,” Obama said. “Where does this stop?”

Last week, Obama and Clinton were in sync in mocking Trump, warning against electing him but laughing him off, building off their line that the presidency's not a reality show. They're still in sync, but the smiles are gone: In their telling, Trump's not a cartoon bad guy or a James Bond villain; rather, he's an evil, frothing maniac and everyone needs to wake up quickly.

Clinton stayed in outright campaign mode, sneering at Trump and encouraging the boos from the audience as she hit him for giving a speech on Monday that was full of “bizarre rants and outright lies,” but leaving the lacerating to Obama.

“Those are the values that ISIS is trying to destroy. We should not help them do it,” Obama said. “Our diversity and respect for one another, our drawing on the talents of everybody in this country making sure that we are treating everybody fairly, we are not judging people on the basis of what faith they are or what race they are or ethnicity they are or what their sexual orientation is.”

The White House and Clinton campaign are constantly in contact, but they say what happened Tuesday was organic.

“I'm not making the case that it's a coincidence; I'm actually making a pretty bold case that they agree that these are principles that are worth fighting for and articulating and that the use of the words 'radical Islam' is a political talking point,” said White House press secretary Josh Earnest. “That is not a counterterrorism strategy. And in fact to use that political talking point only gives our enemies the legitimacy that they are desperately craving. And giving them that legitimacy only makes it easier for them to recruit, and making it easier for them to recruit makes it harder for us to keep the country safe.”

Trump's most immediate response was issued, of course, on Twitter: “Thank you to the LGBT community! I will fight for you while Hillary brings in more people that will threaten your freedoms and beliefs.”

In an emailed response to questions from The Associated Press on Tuesday, Trump said the president “claims to know our enemy, and yet he continues to prioritize our enemy over our allies, and for that matter, the American people.”

“When I am president, it will always be America first,” he added.

Neither Obama nor Clinton responded to that.
But Obama had this to say after speaking at the United State of Women conference Tuesday and praising Clinton:

“I keep waiting for this whole lame duck to happen. … Let me tell you, it will happen as soon as I elect a really good successor.”