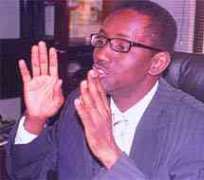 Another strong voice has been added to the growing clamour for the appointment of former chairman of the Economic and Financial Crimes Commission (EFCC), Mallam Nuhu Ribadu, to head the Independent National Electoral Commission (INEC).

Former Lagos State Commissioner for Budget and Economic Planning and contender for the Oyo State governorship in 2011, Dr. Ismail Adebayo Adewusi, said the speculated plan by the acting president, to replace controversial Prof. Maurice Iwu, who was removed last week, would usher in a new era of sane and credible elections in the country.

According to the economist and lawyer, such a move would be a welcome relief to many Nigerians, who had expressed disappointment at the conduct of series of elections under Iwu's watch as well as engender confidence in Nigeria's democracy in the international community.

He described Iwu's sack as 'good riddance to bad rubbish.'

Adewusi said the former anti-graft czar's zero tolerance for corruption and malfeasance would clean the Augean stable, if allowed to oversee the electoral process.

The governorship aspirant, who is contesting on the Action Congress (AC) platform, bared his mind in an interview in Oyo town, where he attended the burial ceremony of late Mrs. Victoria Ohu, mother of Wale Ohu, an AC chieftain at the weekend:

'If the proposal, as reported in some dailies, that the acting president might appoint Nuhu Ribadu as the new electoral umpire, were to be true, to me, it will be a very welcome development. It will be a good thing for Nigerians and a signal of bright electoral future for us in this country.

'I say this because the performance of Ribadu in the EFCC before he was controversially removed was enviable. He showed a strong dislike for corruption. In fact, he had zero tolerance for corruption and so, if appointed to take over from Iwu, I know many corrupt officers in the commission would be shown the way out. I am optimistic that he would allow the electorates' votes to count. Rigging would be averted, and our democracy would have a better acceptance among the comity of nations.'

Adewusi nevertheless observed that for the next INEC boss to succeed, the ongoing electoral reform must be allowed to be carried out objectively.

'Electoral reform will go beyond the mere removal of INEC Chairman, Maurice Iwu. The acting president should put necessary institutional framework together, in such a manner that there will be checks and balance.

There is an urgent need for the appointment of a fearless, incorruptible umpire, who will be a man of character and integrity. The acting president should do more by ensuring the electoral reform is quickly put in place before the next general elections. It is by doing so that he will enjoy the confidence of the Nigerian masses', Adewusi advised.