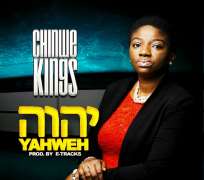 Chinwe Kings is a wife, mother, Gospel minister, singer and songwriter who performs in a great array of African, motivational Christian musical styles. With the real name Chinwe Kingsley, Chinwe Kings grew up in the Eastern part of Nigeria where she had her primary, secondary, and tertiary education. After Chinwe Kings graduated from college (Enugu State University of Science and Technology), she got married to an Engineer. Who later became an RCCG Pastor, Mr. Kingsley.

Chinwe Kings started music professionally in 2010, and released her debut album titled “Praising Jesus Is My Hobby” in 2013. Inspired by God’s faithfulness and love, influenced by Juanita Bynum, Yolanda Adams and Sinach, Chinwe Kings has the vision to impact/reach out to her generation with the love of Christ through inspirational songs and Teachings... Lifting Jesus up everywhere she goes that He may draw all men to Himself.

Chinwe Kings also own and manages a digital music studio and a music training school. She is currently working hard developing/ perfecting her singing ability and also working on her second album (Untitled yet).

After the success of the lead single Eze (King), the female Gospel music minister, Chinwe Kings is back with the second single off her yet to be named sophomore album.

Chinwe Kings worships the name of God the Creator with the new single titled Yahweh. Produced by E-Tracks.

GET EZE BY CHINWE KINGS -
http://tooxclusive.com/download-mp3/chinwe-kings-eze/