We must renegotiate our union to make it strong: Atiku 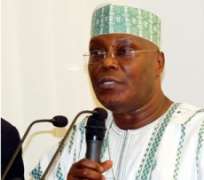 Following a terrain many especially party faithful may term unfortunate, and like a lonely voice in the wilderness, former vice President Atiku Abubakar and Chieftain of the All Progressives Congress,APC, braved the courage to say that the Federal Republic of Nigeria as currently constituted is not working.

For him,  greater autonomy to states is the panacea to the country's multi-faceted internal crisis.

Atiku spoke on Tuesday, at the official launch of “We Are All Biafrans”, a new book written by activist, journalist and scholar, Chido Onumah, in Abuja.

Atiku was emphatic when he said that Nigerians have suffered for too long under a poorly-designed structure.

In his words: “Nigeria is not working, as well as it should, and part of the reason is the poor way we have structured our economy and governance especially since 1960.”

The former Vice President said the federal government's powers dwindle those of states, consequently making it difficult for states to carry out customised initiatives for their individual residents, a situation he said “needs to change”.

“The federal government is too big and too powerful relative to the federating units. “That situation needs to change and calling for that change is patriotic,” he opined.

He also urged Nigerians to desist from labeling those clamouring for a weak center in Nigeria's political system as unpatriotic.

“We must refrain from assuming that anyone calling for restructuring of our federation is working for the breakup of our country. Absolutely not. And I reject that notion,” he said.

He went on to say that the federal government can not foster national unity even with its enormous power, adding that it is worsening the country's circumstances.

In his words: “An excessively powerful centre does not equate to national unity. Absolutely not. If anything, it has made our unity more fragile, our government more unstable and our country more unsafe.

We must renegotiate our union in other to make it strong.” Mr. Atiku, therefore, urged Nigerians to embrace a restructured Nigeria, saying it will also reduce the importance politicians place on elections into federal positions.

In his own speech, Chido Onumah, the author of “We Are All Biafrans”, said the book took him three years to put together. The launch was attended by former Education Minister, Oby Ezekwesili, civil society leaders, Jubrin Ibrahim and Nnimo Bassey.

The book, which explains how the agitation for Biafra is actually a metaphor for all the tribes in the country, was reviewed by Chidi Odinkalu, a professor of law and former chairman of the National Human Rights Commission.