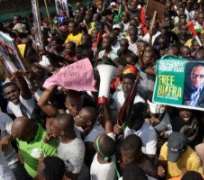 No fewer than seven persons have been confirmed dead following protest by members of the Movement for the Actualisation of Sovereign State of Biafra (MASSOB), in Asaba on Monday.

The Acting Police Public Relations Officer (PPRO), in Delta, Charles Muka, who confirmed this in a statement, added that the police recorded two casualties.

He said in the statement that five members of MASSOB were killed by military officers who had confrontations with the group along the Asaba-Onitsha Expressway in Asaba.

It stated that the military arrested and brought eight members of MASSOB to the police and “are now in custody in Asaba.''

According to him, the protesters turned violent and attacked the policemen deployed to monitor the protest, killed two and injured two others.

“We had to deploy our officers to ensure that the protest was peaceful but we were surprised that the people turned violent.

“To our surprise, they started attacking our men and at Okwe Junction in Abraka area of Asaba, the group killed a police corporal and took his AK47 riffle.

“Also along the Dennis Osadeby Way in Asaba, they wounded a police officer and took his anti-riot gun.

“This group also attacked and wounded two policemen, suspected to be marine police, and threw them into the River Niger at Cable Point in Asaba and in the process one died and one was rescued.

“This brings the casualty number to two with two others injured on the side of the police.

“The protesters also attacked military vehicles along the Asaba-Onitsha Expressway which left four members of the group dead and eight others arrested and brought to the police headquarters.”

It added that a pregnant woman was hit by a stray bullet during the fracas but now receiving treatment at the Federal Medical Centre, Asaba.

The statement advised parents and guardians to warn their children and wards to follow the part of peace and pursue their agenda constitutionally.

Several members of pro-Biafra groups were arrested across the South-East on Monday as they staged church services and protests to mark the 49th anniversary of the declaration of the defunct Biafra republic.