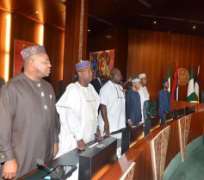 States have agreed to reform the finances of State and Local Governments under a Fiscal Sustainability Programme to ensure their long term viability.

·         The 22-point fiscal reform action plan to be implemented by States under the Programme mirrors the ongoing public financial management reforms being undertaken by the Federal Government, including: biometric capture of all civil servants, the establishment of an Efficiency Unit, implementation of Continuous Audit, improvement in Independently Generated Revenue (IGR) and measures to achieve sustainable debt management.

·         The reforms were unanimously agreed by state governors during the National Economic Council meeting that was held on Thursday 19th May.

·         The Federal Government is developing a financial support structure which will be directly tied to the attainment of agreed fiscal reform milestones.

·         The ultimate objective of the Programme is to ensure that States are set on a path towards fiscal sustainability.