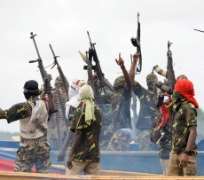 Italian energy company Eni confirmed Monday that some of its infrastructure in Nigeria was once again the target of a militant attack.

A spokesperson for the company confirmed through email the Ogbaimbiri-Tebidaba pipeline was targeted by militants in Nigeria. About 4,200 barrels of oil per day worth of Eni’s equity production was affected by the attack.

The attack was the second on Eni infrastructure in Nigeria in less than a week . No group claimed responsibility for the attacks and the Italian energy company offered no further information when pressed for details.

A group calling itself the Niger Delta Avengers took credit for attacks on Chevron and Royal Dutch Shell in early May. The group said it was waging war on the energy sector because of environmental degradation and corruption in the region.

The Movement for the Emancipation of the Niger Delta, a group observing a cease-fire reached in 2014 with the government, said recently it condemned the new assault on the Niger Delta. It distanced itself from the Niger Delta Avengers said the new attacks had nothing to do with regional struggles, but were instead a tool to pressure the government of President Muhammadu Buhari .

The Niger Delta Avengers in a mid-May declaration said it was frustrated by what it saw as a lack of attention to the region paid by the Nigerian president.

Renewed attacks on oil in Nigeria, a member of the Organization of Petroleum Exporting Countries, comes at a time of economic downturn. The oil sector during the first quarter of the year accounted for about 10 percent of real gross domestic product. That’s slightly lower than the previous quarter, but 2.2 percent higher year-on-year.

The nation’s economy is nevertheless in contraction . The government last week reported full GDP at -0.35 percent. Attacks on energy infrastructure in the Niger Delta as the Nigerian economy reports negative growth for the first quarter. Graphic courtesy of Nigeria’s National Bureau of Statistics