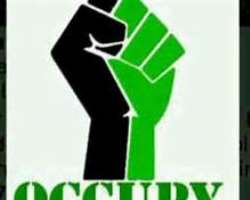 Most evaluation of the fuel subsidy situation in Nigeria will quickly reveal the trails of betrayal and mysticism of white magic. Hell yeah that is the story of Africa in a nutshell. A place that flows with milk and honey though many indigenous people are forced to run away from the lands due to so-called poverty. Those that benefit the most from our minerals have managed to convince the world with the narrative that Africa is poor and primitive whereas they work with their African allies to rob the continent dry. Sometimes like in the situation in Nigeria they call for all to sacrifice and eat of the skeletal bones when they partake of the fattened spoils.

Despite calling for nationwide strikes in this second act petroleum magical subsidy dance, the Nigerian Labour Congress (NLC) and Trade Union Congress (TUC) are at the same crossroads that we faced in 2012. The present government of President Buhari is calling upon them to make sacrifices on behalf of the fat cats. It must be recalled that in 2012, Buhari and his political sponsors such as Mr. Rotimi Amaechi former governors of Rivers State and Mr. Babatunde Fashola former governor of Lagos State, paid lip service to the demands of the Occupy Nigerian Movement. Today these progressive criminals are now minister of Transportation and minister of Power, Works and Housing respectively.

Although 23years old Muyideen Mustapha was the first casualty of the protest in Ilorin the capital of Kwara State. Then so-called progressive governor of Lagos betrayed the marchers when he connived with President Jonathan to respond with troops to faceoff peaceful protesters. Those forces who they hesitated to deploy against Boko Haram wasted no time in gunning down young Ademola Aderinde in Lagos.The top echelon of the National Labour Congress and the Trade Union Congress went on to betray not just the labour of our heroes past but the lives of the nearly twenty protesters who died during the occupy Nigeria protests.

Indeed our Occupy Nigeria Movement began as a result of betrayal and the magical reasoning of shock and owe. President Jonathan used the 2011 Christmas Day church Bombings in Abuja as the pretext to initiate the fuel subsidy voodoo. But the list of treachery continued afterwards as Omoyele Sowore of SaharaReporters.com decided to cast his lot with the All Progressive Congress (APC) party of Nigeria. Mr. Sowore who had crashed the 2012 Washington DC Occupy Nigeria Movement march at the World Bank decided to advocate for a party and by extension individuals likeBuhari, Ahmed Tinubu, and Rotimi Amaechi, classical members of the global 1% instead of the 99% of Naijas.

At the Occupy Nigeria Movement platforms we also had a watercarrier for the senate leader (criminal) Bukola Saraki. Wey we dey waka for cold for near 0 degree temperature we fall mugu. Some allowed that “na my pally” (friend) mentality to distract us from the bigger picture of running a tight organization. In retrospect hope we realize that vested interests always have counteragents among change agencies. They even speak the language of change to sow deceit. Even the children of our great ancestor Fela fell for the ploys of Mr. Buhari and APC the current ruling party in Nigeria. Some of the same Nigerians that balked at the removal of fuel subsidy are now backing the policy.

Hopefully, the union officials will not betray Nigerians again by looking out for their personal interests like some did in 2012. The duplicity and inaction with Boko Haram was partly responsible for the election of Dictator Muhammadu Buhari as the current president. Nigerians became so disillusioned that they decided to forgo (sacrifice) the differences between true revolutionaries and reformers like Thomas Sankara of Burkina Faso and Jerry Rawlings of Ghana with our imaginary Buhari who has remained part of the problem in Nigeriaat every level. In the haste to remove a corrupt party Peoples Democratic Party (PDP) we brought back PDP 2.0 in APC with their calls for us to sacrifice.

Nigerians and the unions need not make the same mistakes of 2012. We can actually achieve economic emancipation from the political and military establishments. If 99% of Nigerians and the unions can strike and shutdown the government we can also reignite and build a labour party that can free us from the shackles of our internal economic slave masters.There is the capacity to bring this remix government to their knees and grant Mr. Buhari the extended vacation that he truly seeks. But will we allow ourselves to dream bigger than those temptations of our personal comforts and the chains of religion and ethnicity that the 1% uses in exploiting us most of the time. Time will tell.

Disclaimer: "The views/contents expressed in this article are the sole responsibility of the author(s) and do not necessarily reflect those of The Nigerian Voice. The Nigerian Voice will not be responsible or liable for any inaccurate or incorrect statements contained in this article."
Articles by Nnamdi Frank Akwada
19-9-2016  Conducting The Much Needed Autopsy Of The Buhari Administration With Truthful Solutions For The Futu22-7-2016  African American Insurgency Is Not Senseless14-7-2016  Black Lives Matter! How Did We Get Here? How Do We Move On From Here?16-6-2016  Addressing The Biafra And Niger Delta Conundrum27-12-2015  What The Golden Eaglets Win At The Under 17 World Cup Tells Us About NigeriaMore...