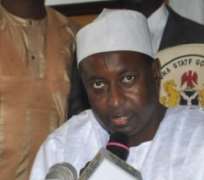 •I shared cash to party agents in 23 LGAs, says ex-governor

The ex-governor has admitted receiving the N700million but he said he shared it to party leaders and agents. He is being detained.

They were arrested and interrogated in Gombe yesterday in connection with N500million allegedly received from the N23.29billion, which the EFCC believes was meant to bribe officials to alter results of the last presidential election in favour of former President Goodluck Jonathan who lost to President Muhammadu Buhari.

A source in EFCC, who spoke in confidence, said:  “The former governor has been quizzed and detained at our Kano office since Monday.

“He was implicated by two people who were earlier arrested in connection with the bribe. The two people, the Kaduna State  Chairman of PDP, Haruna Gayya and a former Minister of State for Power Nuhu Way, admitted that when they got the money, they gave it to Yero.

“Yero confirmed that he received the N700million. But he told our investigators that he shared the cash to party leaders in the 23 local government areas in the state for logistics and party agents.

“We are expecting him to release the list of beneficiaries to EFCC. As I talk to you, the ex-governor is still in custody because we are still interrogating him on some issues.

“Our priority is to recover the N700million. We hope he will cooperate with us.”

The Kano State PDP gubernatorial candidate in the 2015 general election, Malam Salihu Sagir Takai, was also invited by the EFCC Kano Zonal Office over the N50 Million  taken by his Campaign Organisation out of the N950 million allocated to Kano State.