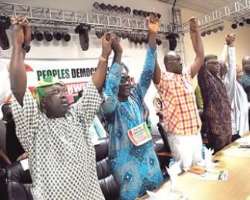 Despite a court order restraining the South-West zone of the Peoples Democratic Party (PDP) from holding the zonal congress, leaders and members of the party converged on Akure, Ondo State capital, to elect new officers for the party.

The congress, which produced a former Commissioner for Information in Ondo State, Honourable Eddy Olafeso, as National Vice Chairman (South-West), was attended by the Governor of Ondo State,  Dr Olusegun Mimiko and his Ekiti State counterpart, Mr Ayodele Fayose

Some elected officials of the party emerged unopposed, while the position of the treasurer was contested for between Ogunrinde and Kolawole who are both from Ekiti, as the leadership of the party had earlier zoned the post to the state.

Ogunrinde, who was the candidate of Governor Fayose, had 62 votes, while Kolawole had 12 votes.

Other leaders of the party at the congress were Senator Iyiola Omisore, Honourable Ladi Adebutu, Honourable Albert Adeogun, Senator Abiodun Olujimi, Honourable Bade Falade and  Chief Bayo Faforiji, among others.

Governor Mimiko, in his remarks, called for unity among all members of the party, saying the future of the country lies in the hands of the PDP.

He said: 'PDP has a bright future in this country. But our actions and inactions will determine the future of our party in Nigeria.

'We must, therefore, stand for integrity as a party with history of integrity and progressivism.

Mimiko added that, 'the extent to which we stand up for the truth will determine the future of our party.'

Also speaking, Governor Fayose emphasised the need for the party to unite  and work together to reposition the party in the zone and called on all members to work towards the victory of the party in the 2019 presidential election.

He denied insinuation that he was working against the interest the elderly people in the party, saying: 'I love our elderly people, but the elders should play the role of advisers and allow the young generation to take over. This is in line with my stand against President Muhammadu Buhari who is too old to rule Nigeria.'

Fayose declared any other congress held in the South-West zone as illegal, saying that members of the party who failed to  recognise the Akure congress are enemies of the party and progress.

He appealed to the judiciary to be weary of those who only wish to win elections through the court and not through election.

Inaugurating the new zonal officers of the party, the congress chairman and former Rivers State governor, Dr Celestine Omeha, urged the new leaders to work for the progress of the party in their different capacities.

In his acceptance speech, the new zonal chairman, Olafeso pledged to do his best to reorganise, reposition and reunite the party in the zone and therefore called on all members of the party to support him.

He said that the party would send the All Progressives Congress (APC) out of government come 2019.

Meanwhile, the National Vice Chairman (South West) of the PDP, Chief Makanjuola Ogundipe, has insisted that the zonal congress of the party held in Akure, is 'a nullity,' citing court's stoppage of the event.

Ogundipe said on Saturday that the national secretariat of the PDP had received the court order barring the congress and said they were ready to abide by it by not going ahead with the zonal congress as earlier planned. - Tribune.