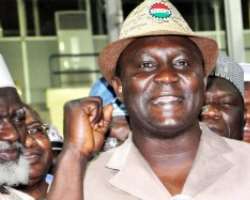 The Nigeria Labour Congress on Saturday issued  the Federal Government a four-day ultimatum to revert to the old petrol pump price of N86.50 or face labour industrial action.

The ultimatum is coming barely three days after the Nigerian government announced a new price band of N145 per litre.

The labour union kicked against the increase , saying the unilateral increase in prices of petroleum products “represents the height of insensitivity and impunity”.

The new price band of N145 per litre for Premium Motor Spirit was announced by the Minister of State for Petroleum Resources, Dr. Ibe Kachikwu.

No fuel service station is, however, allowed to sell above the price band, the Minister stressed.

He had explained that the increase had become necessary due to the scarcity that had lingered for months caused by unavailability of the product occasioned by the challenges of getting foreign exchange and low production capacity of the refineries in the oil producing nation.

Dr. Kachikwu had assured Nigerians that in the next six months, competition would force the price down. The unions four-day ultimatum came a day after the Vice President, Professor Yemi Osinbajo, further gave reasons for the increase which critics said carried with it 'hardship'.

He said: “I have read the various observations about the fuel pricing regime and the attendant issues generated. All certainly have strong points.

“The most important issue of course is how to shield the poor from the worst effects of the policy. I will hopefully address that in another note”.

Professor Osinbajo explained that the real issue was not a removal of subsidy , pointing out that with $40 a barrel there was not much of a subsidy to remove.

The country is grappling with its worst economic crisis for decades because a slump in oil revenues has hit public finances and caused a shortage of hard currency needed to fund fuel imports.

However, raising fuel prices is sensitive, because many Nigerians see the subsidy as the only benefit they derive from living in Africa’s top oil producer which is gripped by graft and poverty despite its energy wealth.

Nigeria imports almost all its gasoline because its refineries have been neglected for years.

The Nigeria Labour Congress and the Trade Union Congress, representing millions of workers in the private and public sectors, called on its members to shut down Nigeria from Wednesday unless the government abandoned its plans.

The strike would be indefinite and would also cover airports, seaports and banks, they said in a statement.

“Nigerian are therefore advised to stock sufficient food items that will last for a while for the prosecution of the current struggle against (a) neo-liberal agenda in Nigeria,” the unions said.

The West African country tried to end fuel subsidies in 2012, doubling the price of gasoline overnight, but later reinstated some of the subsidy to end a wave of strikes called in protest.

Nigeria has for years set a cap on prices for fuel sold at home and paid importers the difference via subsidies. But in its 2016 budget, the cash-strapped government did not allocate any money for the subsidies.