What Tinubu said on subsidy removal in 2012: Jonathan has betrayed the people 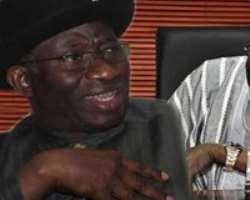 Asiwaju Bola Tinubu, Action Congress of Nigeria (ACN) national leader and former governor of Lagos State, has accused the Jonathan presidency of betraying its social contract with the people by suddenly removing fuel

subsidy.He, however, provided a window out of the crisis: if subsidy must be

removed at all, it must never be at one fell swoop. Rather it must be on

calibrated phrases, on which the promised gains are measured and confirmed

before moving to the next phase of removal.“Government must modify the sudden and complete removal of the subsidy.

Either we restore the subsidy or use the funds for other social purposes,”

Asiwaju Tinubu counselled in a special release he captioned, 'Removal of

and which he personally signed.
“If we are to use the funds for other programmes, these programmes shall

be placed on parallel track with the subsidy. As more of these programmes

are ready to go on line, then the subsidy can be lifted in phases” he

continued. “In this way, the public is assured government will not lower

its total expenditure on their behalf, thus maintaining the spirit central

to the social contract.”
But the former governor cautioned the federal government against economic

explained. “It all depends on what and who in society government would

rather favour. The Jonathan tax,” he declared, “represents a new standard

in elitism.”
But the ACN national leader cautioned the president against being captive

to economic orthodoxy and its local purveyors, who always look at the

conservative orthodoxy.
“Because he is slave to wrong-headed economics,” Asiwaju Tinubu said of

President Goodluck Jonathan, “the people will become enslaved to greater

misery. This crisis will bear his name and will be his legacy. The people

now pay a steep tax for voting him into office. The removal of the subsidy

is the 'Jonathan tax',” he insisted. “The situation shows that ideas count

more than personalities. People may occupy office but how that person

performs depends on the ideas that occupy his mind.”

Insisting that the subsidy removal was ill-timed, he said there must be

some conditions precedent before such a step could be taken.

in the NNPC [Nigerian National Petroleum Corporation]. Then, proceed to

network with long term bonds and,” he added, “fully develop the energy

sector towards revitalising Nigeria's economy and easing the burden any

subsidy removal may have on the people.”
The former governor however counselled protesters to go about the protests

in a peaceful manner, and to eschew all forms of violence.