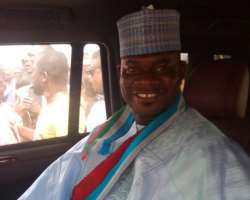 The embattled Kogi State Governor, Alhaji Yahaya Bello on Thursday ran to the National Secretariat of the All Progressives Congress for help following the brewing crisis rocking the Kogi state chapter of the party threatening to consume him.

Yahaya Bello who drove himself to the party Secretariat at about 12:15pm in a Maroon Porsche Cayenne Jeep, in company of his security details moved straight to the office of the National Deputy Chairman, North, Senator Lawal Shuaibu where he held a close-door meeting for about an hour and later head to the National Chairman's office.

Governor Yahaya Bello who snubbed the press that approached him to hear the outcome of his two hours visit to the party National secretariat, but refused to comment only responded no press as he headed to his waiting Porsche Cayenne Jeep and zoomed off.

However, unconfirmed sources revealed that the party reprimanded the governor for some of his actions since he was sworn-in as governor of Kogi State.

The sources also informed that Yahaya Bello was reprimanded by the National Leadership of the Party for side-lining the executives of the party in his appointments, as well as not consulting major stakeholders in the party in designing his executive bills and programme.

It was also revealed that the governor was ordered to make funds available to the party for overhead, just as he was reminded that he was a governor of circumstance and should utilize the rare opportunity to write his name in gold.

Sources revealed that the governor who became the party’s governorship flag bearer by divine providence after the death of Prince Audu Abubakar, had not provided funds and vehicles for the running of the party but started nursing animosity against the state executives when he lost the primaries elections to Prince Audu. He was even accused of defecting from APC to Social Democratic Party, SDP.

It was gathered that when fate smiled on him as the State governor, he made frantic efforts to remove the state chairman and other state executives who worked against his election.

It was also alleged that Yahaya Bello equally divided the state legislature and coerced nine lawmakers out of 25 to impeach the speaker of the State Assembly just as he allegedly made five lawmakers to endorse his signing of the 2016 Appropriation Bill out of 25 lawmakers.

It would be recalled that the House of Representatives had earlier ordered the police to seal the premises of the state house of assembly, and ordered the governor to submit his bills including the 2016 Appropriation bill to the National Assembly for approval