I Met Badeh For The First Time 2 Days Ago—Witness 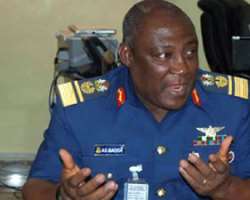 The second prosecution witness in the ongoing trial of former Chief of Defence Staff, Air Chief Marshall, Alex Badeh, wednesday told a Federal High Court in Abuja that he just met A.S Badeh for the first time on 9th March 2016.

He also told the court that his statement to the Economic and Financial Crimes Commission (EFCC) was made in error.

The witness had in his statement to the EFCC stated that he sourced the sum of $3.1million and gave it to Group Captain Sinni after the sum of N76million was transferred to HAVCO Nigeria Limited from the N558million set aside monthly for the office of the Chief of Air Staff (CAS).

But in his evidence before the court, the witness said the sum of $2.9million was given to Group Captain Mohammed L. Sinni, the Camp Finance Officer for the month of May, 2013.

“In the course of your evidence you gave a list of dollars you gave to the CFO every month and for the month of May 2013, you said you gave $2.9million to Sinni whereas in your statement at the EFCC, you said $3.1million was sourced by you,” Olujimi asked the witness.

Responding, the witness said: “The statement with the EFCC was in error. I confirm that it was an error while writing the statement.”

Also when asked if there is any record showing that he gives money monthly to Sinni, the witness said no.

“I have no records of what I gave to Sinni monthly because the CFO (Sinni) was a custodian of everything, I was only assisting him.

“All payments made either by mandate or cash was signed by the CFO and myself but I received the dollars from the Bureau de Change (BDC) because I was the one interfacing with them.”

Also when Olujinmi put it before the witness that it would be correct to say that the only record that exists to show that the witness monthly disbursed dollar equivalents of N558million to Sinni were “only in his head”, the witness said yes.

Also when the witness was asked to corroborate the claim of the Director of Finance and Accounts, Air Commodore Abdullahi Yushau (rtd), who said the usually converted N558million was given to him first in October 2012, the witness said he did not know, adding that the first time he gave the N558million dollar equivalent to Sinni was in November 2012.

“I wouldn’t know if someone gave Yushau the dollar equivalent of the N558million in October 2012,” he said.

The witness who said he was given a verbal instruction by Sanni in 2012 shortly after Sinni assumed the position of Camp Finance Officer (CFO) to set aside the sum of N558m monthly for training and operations, admitted that he never received any instruction from the first defendant (Badeh).

He also admitted that Badeh never asked him to give him any money either in naira or dollars.

He further stated that Badeh did not at any time instruct him to make any withdrawal or transfer to any person or company.

According to the witness, the first time he met Badeh was on May 9, 2016 just outside the courtroom, just as he told the court that he did not know if the usual practice of setting aside N558million for the office of CAS was there before November 2012.

Earlier, the witness who said he joined the Air force in 2004 as a commissioned flying officer added that his schedule of duty was to assist the Camp Financial Officer in all financial transactions, book-keeping and interfacing with banks and BDCs.

He also gave a breakdown of how monies and transfers were made between November 2012 and December 2013.

Following the conclusion of the cross-examination by the defence counsel and the absence of further questions by the prosecution for re-examination, trial judge, Justice Okon Abang, adjourned further hearing till May 18, 2016.

In another development, a Federal High Court in Abuja yesterday granted bail to a former Chief of Air Staff, Air Marshal Dikko Umar (rtd), on personal recognition after he pleaded not guilty to charges of laundering about N4.8 billion.

Umar was arraigned before Justice Binta Nyako by the federal government on a seven-count charge bordering on money laundering of N4.8 billion during his time as the head of the Nigerian Air Force.

He pleaded not guilty and was admitted to bail on self recognition following the no-objection submission to Umar’s bail application by the prosecuting counsel, Mr. Sylvanus Tahir.

“The defendant having been granted administrative bail by the EFCC, is hereby admitted to bail on self-recognisance and shall deposit his international passport with the Chief Registrar of the court and shall not travel out of the court’s jurisdiction without permission,” Justice Nyako held.

The suit was adjourned till 7, 8 and 9 June for trial.

Umar’s counsel, Mr. Hassan Liman (SAN) had informed the court that he filed and served the defendant’s bail application on May 9 and urged the court to grant his client bail on liberal terms owing to the fact that he (Umar) had been granted administrative bail by the EFCC.

Liman said the application was supported by a 23- paragraph affidavit and three exhibits and accompanied with a written address.

While not opposing the defendant’s bail application, the prosecution lawyer, Tahir, urged the court to grant Umar bail on such terms and conditions that would compel the defendant to attend his trial.

A former Director of Finance and Accounts at the NAF, Air Commodore Yushau (rtd.), had revealed before the Federal High Court sitting in Abuja, that some past NAF chiefs diverted N558.2m monthly from funds meant for the payment of salaries of NAF officials.

He told the court that the system was in place when he served under former Air chief, M. D. Umar, from 2010 to October 2012.