Beyonce, JayZ fighting to pull their marriage back from precipice: Shanica Knowles 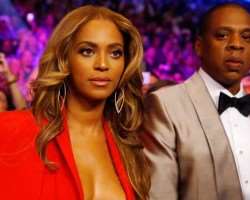 When Beyoncé dropped her new album, Lemonade, there was one song, “Sorry,” that really stuck out. There had been rumors that there was trouble in Beyoncé and Jay Z’s marriage prior to the track, but it seemed to confirm the speculation surrounding Jay Z and his alleged infidelity.

And now, Beyoncé’s cousin Shanica Knowles has revealed some family secrets — ones that she probably won’t be thanked for speaking about. And believe us, they’re super juicy and reveal a lot more about what the album means to Bey than we ever could have guessed.

“Beyoncé’s been encouraged to write about the affair rumors to help her deal with it all and help her determine whether she could work through everything or had to end the marriage ,” Shanica told Heat Magazine.

“This has been a long process and I’ve heard they’ve had to deal with silent separations and splits over the past few years, but Beyoncé is praying that this album will actually save their marriage,” she continued.

Um, what? Did we just read that Bey and Jay Z have split up multiple times? This is pretty surprising news because we really thought that they had one of the strongest relationships in Hollywood.

With her latest album, Beyoncé made the brave decision to bare all her emotions (the good, the bad and the ugly) and share them with the world, but this was much more than just a piece of creativity. It was also an attempt to mend the couple’s broken relationship.

“She’s been through the intense anger and I think she’s now learning to forgive Jay,” Shanica revealed. “The next few months are going to be the test — this is now make or break for them — but Bey’s determined to do everything she can to make it work.” But perhaps the most surprising part of the interview is not that Shanica revealed family secrets and essentially confirmed that all is not well with Beyoncé’s marriage. It’s the part where she revealed that this could soon be the end of the line for the power couple.

“She’s admitted that she still may end up divorcing him. It’s up to Jay to continue fighting for her and prove that he’s determined to do whatever it takes to keep his wife,” Shanica explained. Wow. We’re really trying to wrap our heads around the thought of Beyoncé and Jay Z splitting for good. Do you think this is a possibility? Share your thoughts with us in the comments below.