I think it would be foolish to ignore GOP voters who chose Trump: John McCain 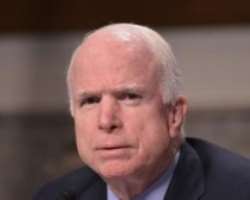 Sen. John McCain is chastising GOP leaders for failing to embrace Donald Trump as the choice of millions of voters, laying out his most extensive views to date about Trump at the top of the ticket. He’s also repudiating some of the presumptive nominee’s comments — particularly about prisoners of war.

In a wide-ranging “State of the Union” interview in his campaign office in Phoenix, McCain criticized party leaders who are reluctant to back Trump, saying they are “out of step” with voters who have chosen the controversial businessman as the GOP standard-bearer. He defended Trump for being a strong and “capable” leader, particularly on foreign policy. He called on Trump to choose a running mate who could “unite the party,” possibly Iowa Sen. Joni Ernst, even as he strongly defended his 2008 choice of Sarah Palin.

But he also urged Trump to “retract” his criticisms of prisoners of war while blasting Trump’s personal attacks during the primary campaign as off-putting.

“Frankly, I have never seen the personalization of a campaign like this one, where people’s integrity and character are questioned,” said McCain, the veteran senator of nearly 30 years and his party’s 2008 presidential nominee. “It bothers me a lot. Because you can almost violently disagree with an issue, but to attack their character and their integrity — then those wounds take a long time to heal.”

Asked if Trump should continue calling Hillary Clinton “corrupt Hillary,” McCain said: “Well, I wouldn’t, but I’m not one to tell him how to campaign except on the part of uniting the party.”

McCain, 79, said he’d back the nominee since GOP voters have had their say. Romney, Bush, and others to skip Trump’s GOP convention

“You have to draw the conclusion that there is some distance, if not a disconnect, between party leaders and members of Congress and the many voters who have selected Donald Trump to be the nominee of the party,” McCain said when asked about the comments by House Speaker Paul Ryan and his close friend Sen. Lindsey Graham, both of whom have so far refused to back Trump.

“You have to listen to people that have chosen the nominee of our Republican Party,” McCain said. “I think it would be foolish to ignore them.”

At the same time, McCain would not commit to appearing on the same campaign stage as Trump, a tacit acknowledgment of the balancing act the Arizona senator needs to perform as he faces re-election this fall. He needs to court Trump backers in a state that the candidate handily won during the primary season, while also reaching out to independents, Latinos and women voters — many of whom view the real estate mogul unfavorably.

“A lot of things would have to happen,” McCain said when asked if he would stump with his party’s nominee. He said there’d have to be a condition first: “I think it’s important for Donald Trump to express his appreciation for veterans, not John McCain, but veterans who were incarcerated as prisoners of war.”

McCain was referring to Trump’s jaw-dropping comment last year on POWs, when he said, “I like people that weren’t captured.” GOP wrestles with whether to back Trump 02:24
“I’d like to see him retract that statement. Not about me, but about the others,” said McCain, who was captured and tortured by the North Vietnamese during the Vietnam War.

Asked if he’d like Trump to retract his statements that many undocumented Mexican immigrants are “rapists” and criminals, McCain was more circumspect.

“Oh, I don’t know,” McCain said. “I think that it’s important that we understand the importance of the Hispanic vote in America. Many states — in Arizona, more than 50% of the kids in school are Hispanic. After the 2012 election, as you know, we laid out a blueprint and part of it was outreach to the Hispanic community. I think we ought to recognize that the Republican Party has to do that.”

Despite having a friendly relationship with Hillary Clinton when the two served together in the Senate, McCain was sharply critical of the likely Democratic nominee, saying she would run a feckless foreign policy in the mold of Barack Obama. Trump, he said, would provide a much stronger dose of American leadership around the world.

“Well, I think American leadership, he emphasizes that and I think that’s important,” McCain said when asked what specifically he likes about Trump’s foreign policy platform. “This president doesn’t want to lead. Hillary Clinton was secretary of state for four years — tell me one accomplishment that she can point to besides she flew more miles than any other secretary of state in history.”

As a leading defense hawk, McCain, the Senate Armed Services Chairman, said he wanted to use his influence to “steer” Trump and the party toward Ronald Reagan’s view of national security.

Asked if he had confidence that Trump could be like Reagan, McCain said: “I think that he could be a capable leader. I don’t think anybody is — no one could compare to Ronald Reagan, because he was the right man at the right time.”

Trump’s impact in Arizona
Still, McCain is worried that Trump’s toxicity among Latinos could hurt him in his tough re-election race, where he’s expected to face Democratic Rep. Ann Kirkpatrick in the fall campaign.

“There is a Hispanic vote, which I have to continue my good relationship with because of the turmoil that exists in the whole national campaign,” McCain said, adding that every incumbent has to recognize the “great turmoil” that exists partly because of Trump’s rhetoric and hardline immigration positions.

Asked if the Trump effect was “good or bad” for him in the fall, McCain said: “I don’t think he affects it. I think that with 100% name ID people know me, but having said that, there is turmoil out there as we just discussed.”

Given his long service on Capitol Hill, McCain knows full well that being an incumbent is a vulnerability with the approval rating of Congress at rock-bottom.

“Anybody in this environment that would take a re-election in stride or for granted does not have an appreciation for the tumult that’s out there amongst the electorate, and I’m confident of victory but to take anything for granted would be foolish.”