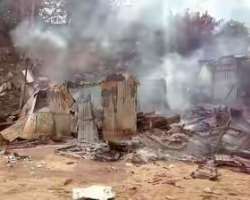 The Nsukka Professionals Group (NPG), a Lagos-based umbrella body of Nsukka professionals from all walks of life, has called on the Federal Government to deploy the full resources of law enforcement and national security to identify and bring to book the perpetrators and indicted security operatives in the criminal massacre of its innocent and defenceless brothers and sisters in Ukpabi/Nimbo.

In a statement issued in Lagos by Charles Nwodo Jr. and Nick Omeye, President and Secretary respectively, NPG strongly condemned the attack and viewed it as an act of criminality of geonocidal proportions, which offended the provisions of the Nigerian Constitution and the various charters of the United Nations.

“The NPG commends the Governor of Enugu State for his leadership in bringing relief and succour to the affected communities and the entire citizens of Enugu State and also in calming the situation, thereby preventing reprisal attacks against Northerners in Enugu State.

“The Government of Enugu State should set up a Judicial Commission of Enquiry into the massacre to determine how and why the security agencies in the state failed to prevent the attack, in spite of the fore knowledge of same and the resources provided by the State Government on the eve of the attack.

“While we note the redeployment of the Enugu State Commissioner of Police in the aftermath of the massacre, the first step in ensuring the non-occurrence of this type of senseless killing in Nsukka and indeed anywhere in Nigeria is to establish if and why the security agencies failed in the performance of their duties to the people of Ukpabi/Nimbo and prosecuting any security officers found to have been negligent in the build up to the crises,” the group stated.

According to the statement, NPG said it would collaborate with local and international civil society organizations to escalate the Nimbo/Ukpabi massacre to the International Criminal Court (ICC) if the recommendation to get justice for the victims was frustrated, or delayed due to bureaucracy.

“The National Emergency Management Agency (NEMA) should deploy its personnel and relief materials to the now internally-displaced people of Ukpabi/Nimbo as a matter of urgency, as we welcome the decision by the Inspector General of Police to establish a Police Station in the Ukpabi/Nimbo area.

“However, we recommend that the Federal and Enugu State Governments make special security provision for the people of the Nsukka cultural zone of Enugu State, on account of its unique location as a boundary between the North and South East and a transit route for goods and people from the North to the South East,” it said.

The group said that it welcomed with gratitude the outpouring of grief, solidarity and support from several quarters and groups within Nigeria and abroad.

“The Ukpabi/Nimbo massacre has joined the growing list of crimes on the global scene which challenge our sense of outrage and faith in our common humanity. The NPG, will work with other men and women of conscience everywhere in the world to keep the tragic events of Monday, April 25th 2016 at Ukpabi/Nimbo in the consciousness of the whole world, and we shall ensure that the deaths of our brothers and sisters at Ukpabi/Nimbo are not in vain”, it said.