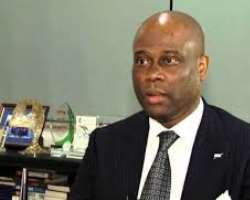 Wigwe was picked up at the Bank's head office in Victoria Island, Lagos State.

Wigwe spent the night with the anti-graft agency.
EFCC, which  has been carrying out investigations on alleged abuse of funds under the last administration, extended its search to the banking industry recently.

It was not clear as at press time why he was arrested, but the EFCC has of late spread its dragnets as seeks to go after the trails of public funds illegally disbursed by the immediate past administration.

EFCC had earlier about a week ago arrested  the Managing Director of Fidelity Bank Plc, Nnamdi Okonkwo, for allegedly receiving in cash $115 million into the Bank's coffers from a former Minister of Petroleum Resources, Diezani Alison-Madueke.

Okonkwo was also allegedly personally given another cash of $26 million.

The Bank has denied complicity in the issue, saying it reported the development to the appropriate authorities.

Following the development, the Executive Director, North, of the Bank, Balarabe Musa, has been named as acting MD.

The Managing Director of Sterling Bank Plc, Yemi Adeola, was also quizzed by the EFCC during the week.

A financial expert who spoke with THE RAINBOW said he would be expecting more arrests in the banking industry as it is difficult for any fraudulent transactions involving huge amounts to take place with the involving of financial inter-mediation provided by banks.