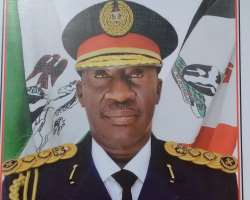 The Commandant General of the Nigeria Security and Civil Defence Corps (NSCDC), Abdullahi Gana Muhammadu, says there is no alter- native to peace, declaring that Nigerians should disabuse their minds about the Boko Haram having a religious colouration, but that it is purely an act of terrorism as it happens in other climes of the world.

The CG made this postulation when the members of the Celestial Church of Christ [CCC], paid courtesy visit to the NSCDC National Headquarters, Abuja.

In his remarks, the head of the delegation of the Celestial Church, Superior Evangelist (Dr.) Paul Jaiyeola, declared that they came to congratulate the Commandant General on his appointment, noting that promotion comes from the Almighty God alone, that his elevation is a call on him for more fruitful service.

Dr. Jaiyeola enjoined the NSCDC Boss in prayer for God to continue to help him in piloting the affairs of the Corps and for the NSCDC to continue to succeed in the discharge of their constitutional mandate.

The Superior Evangelist disclosed that people are aware of the good works of the CG, that he should not relent in doing that which he has been noted for, maintaining that the journey ahead have much works to be accomplished for the Corps, for all Nigerians and humanity in general. The CCC group prayed God to prosper the NSCDC and continually guide the activities of the Corps helmsman, that every decision he makes will be ones that will always catapult the Corps to greater heights.

The group also appreciated the NSCDC Boss for his openness to all persons irrespective of their religious or racial lineage.

The CG welcomed the CCC members for coming to the NSCDC describing their visit as powerful. He said he feels elated and highly honoured for spiritual men of God to pay courtesy call to the Organization. Going down memory lane, The Commandant General eulogized the erstwhile CG of the NSCDC, whom he said worked hard to the point that when he requested for Arms from the Federal Government for the NSCDC, it was granted to enable the Corps discharge their statutory functions.

Gana called on all Christians to put Nigeria in prayer, noting that it is the divine will of God to put us together and to live as one people.

The Leader of the Civil Defence said, '' Our collective language should be peace, peace, peace. There is no alternative to peace, I call on Nigerians to disabuse their minds on the Boko Haram issue, as it has no religious colouration, but it is purely terrorism to its core ''.

The NSCDC Chief Executive Officer revealed, that as an indigene of Niger State, in his family, they have both Christians and Muslims and likewise a host of other families, that during Christian Celebrations and the Muslims celebrations they all celebrate together, no one would ever notice that they profess different faiths. Furthermore, the CG said that for him Abdullahi, he does not know Christian or Muslim, but that he recognizes we are all one people and therefore, he is open to all.

Muhammadu in a solemn mood requested the clergymen to pray for the departed souls of NSCDC Officers shot by police officers at the Cross River State Command. He also requested that prayers also be said for the NSCDC and for himself that such incident should never happen again, and for the Corps to grow from strength to strength.