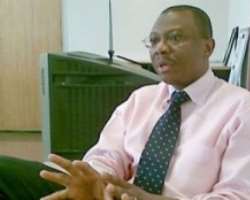 Operatives of the Economic and Financial Crimes Commission  on Wednesday stormed the headquarters of Sterling Bank Plc in Lagos.

The EFCC operatives were said to have stormed the headquarters of the Bank in Lagos and quizzed Adeola for over two hours.

However, the reasons for the interrogation could not be established as at press time, but a report by the Lagos-based PUNCH said that the reason for the action was in connection with an undisclosed investigation..

The Punch said its efforts to get confirmation on the development from the Bank did not succeed.

Officials of the bank were said to have refused to confirm or deny the visit by the EFCC operatives.

The EFCC also did not offer any explanation for the interrogation of Adeola.“The operatives of the anti-graft agency quizzed the Managing Director of the bank, Mr. Yemi Adeola, for over two hours, but the details were not disclosed,” the report said.

“When contacted on the development, officials of the bank refused to confirm or deny the visit by the EFCC operatives,” the report further said.