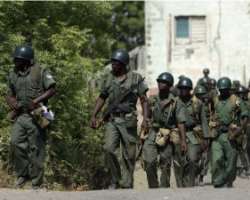 Nigeria’s army reported Wednesday it rescued more than 400 hostages, including several women and children, held by the Boko Haram terrorists.

Troops of the Seventh Division conducted a special operation at Chingurimi, Walasa and Masa villages.

The troops killed several Boko Haram terrorists and rescued 17 women, an elderly man and 24 children at the area, according to Col. Sani Kukasheka Usman. They also recovered an AK-47 rifle and several rounds of ammunition.

The rescue operation has been one of several conducted by the Nigerian army over the last month.

The army said 11,595 civilians held at various enclaves by the terrorists have been rescued as troops are seeking to rid insurgent activities in the northeast.