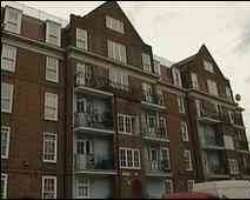 Mr Daley was found stabbed in Stockwell
A 14-year-old boy has been charged with the murder of a 45-year-old man who had faced sexual offence allegations.

Robert Daley was found stabbed to death at an address in Ferndale Road, Stockwell, south London, on Friday.

The teenager, who was arrested on Tuesday night, will appear at Sutton Youth Court later, the Metropolitan Police said.

A 14-year-old girl appeared in the same court on Tuesday charged with the killing.

Scotland Yard said a 16-year-old girl also arrested on Tuesday in connection with the investigation was bailed to return in May.

The Crown Prosecution Service confirmed Mr Daley had been investigated over allegations of sexual offences, but the case was dropped.

Police said he died from stab wounds to the chest.

The 14-year-old girl appeared in custody at Sutton Youth Court and was remanded in secure accommodation, with the case adjourned to 25 May.

An 18-year-old man was arrested earlier in connection with Mr Daley's death. He has been bailed until May.