Bukola Saraki And His Gang Of Many Thieves 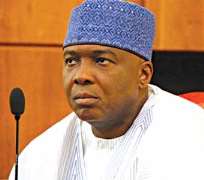 I have often hypothesised on the concept of power. I hold firmly to the belief in the beauty of democracy as the bastion of inclusiveness and participatory governance. I strongly believe that in a democracy, power flows directly from the people thereby making the masses the real custodian of power. However, democracy as practiced and abused in Nigeria has raised numerous questions about its relevance at this stage of our nationhood.

The ongoing circus at the national assembly with its increasing meandering towards corruption and corruptible acts are no compliments to the beauty of democracy. A situation where the hallowed chambers are filled with shameless criminals, questionable characters, child abusers, celebrated looters, expert forgers and convicted drug barons turn the concept of democracy into a laughable sham. It amplifies the alternative sentiment that a badly managed democracy has no beauty and can indeed become a monster difficult to manage. We are at this stage in our national history, courtesy of Bukola Saraki and his gang of many thieves.

And so the shenanigans continue and the hallowed chamber of the Senate of the Federal Republic of Nigeria diminished further. In the face of mounting odds about the impossibility of his functioning as Nigeria’s Senate President, Dr Olubukola Saraki has continued to defy national expectation. In the face of increasing opprobrium and national disgust, Bukola Saraki has chosen the path of the prodigal son. A prodigal son that will defy redemption. His manifest insensitivity to national trauma arising from his ludicrous occupation of the nation’s number three post is appalling and alarming and calls into question the foundation, rationale and basis of democracy in Nigeria. A democracy that will allow the likes of Bukola Saraki to occupy high offices and use same to fester his nest and further entrench corruption amongst a shameless cabal. I will not completely agree with the view that an embryonic democracy like ours will necessarily undergo a teething process. The fact is that the whole world is in a hurry and Nigeria should not be left behind in the social, physical and economic emancipation of its people. There should be no accommodation of retardation and distraction as that created by the shameless Saraki circus.

The current circus show in Nigeria has further highlighted the numerous malaise inherent in our cataplectic strive towards nationhood. That a bicameral national assembly is unnecessary, wasteful and a strong bedrock of corruption has been finally cemented by this odious spectacle. That the calibre of those appointed to public offices has always been low and appalling has been further highlighted. That our judiciary is archaic, corrupt and a great contributor to our seemingly disastrous attempt at national emancipation is no longer news. In fact, the realisation that the Nigerian nation requires a drastic, surgical redemptive approaches that are obviously not in the offing stares strongly at our faces. That our jeopardy and discontent as a nation may continue for a long time to come is that sad prospect.

No nation can harbour the amount and severity of incendiary social discords as that obtained in Nigeria and yet remain glued together as one. The fact of this does not make Nigeria a unique case. It only emphasises our fragility with structural deficits akin to precarious encampment on a keg of gunpowder. If the nation is not in the throes of professionally diabolical and retrogressive clergy men, then it will be an unending war with kidnappers and armed robbers. While ritualists and human traffickers hold sway, the other battle is with the ubiquitous Boko Haram sect. Struggling to contend with all these, Fulani herdsmen refused to be left out, rampaging through the entire country causing anguish and tears. As if all these are not sufficient, our political life continue to be stage-managed with cycles of morbid elections. We repetitively make the same set of mistakes and consistently elect tainted characters into our national life. The only beneficiaries of this huge mess are the likes of Bukola Saraki, Dino Melaye, Sani Yerima, Ali Ndume and a host of other such felonious characters.

Back to the issue of Bukola Saraki and his on-going corruption case at the code of conduct tribunal. Bukola has utilised every opportunity to shout political persecution. His body language continue to pass the message of indifference to the heinous crimes he committed. His attitude remains unapologetic with constant reminder that there are numerous such sordid characters in his league. True as this may be, it nevertheless does not exempt him from the guilt of his deeds. In the words of Frisky Larr, Saraki by his actions, especially his evil activities leading to his controversial emergence as the Senate President, has amply demonstrated how not to play the politics of desperation and short-term gains.

Saraki’s hold on the Senate is a mere reflection of the power of filthy lucre. It is a testimony to the influence of corruption and a sad reflection of the characters encompassed by the hollow chamber. That the senate has been effectively turned into one of his numerous personal companies is a fact that is yet to register with many Nigerians. He has dominated the senate like he does his many enterprises. However, the danger is that Saraki is majorly a mortician of good enterprises and the 8th Senate stands no chance. The only business that survived in Saraki’s hands are those detailed in the Panama papers – and we all know what these are and stand for. The necromancer has effectively damaged the upper chamber – again in the words of Frisky Larr, encouragement of a band of renegade law makers to constantly abandon duty posts for his court appearances, encouragement of cross-party acceptance of SUV bribes, unbridled enthusiasm at amending existing laws deemed unfavourable to their collective interest and perpetual dichotomy in the upper chamber on account of his self-imposition. The senate needs to be rescued and urgently too or if the people so decides, scrapped. Good riddance to bad rubbish.

As it is for the senate, so it is for the country as a whole. One of the many questions is this: is it right for a “politically spoilt child and a celebrated scoundrel” to continue to hold the nation to ransom? Is it right for this heightened state of arousal on account of an unrepentant narcissistic scoundrel to be allowed to continue? Nigeria is besotted with many ailments that warrant collective efforts. Must we spend months (or even years of agony) waiting for a poster boy of corruption to know when to throw in the towel? Nigerians have stood up, even though in their minority, to explicitly state that enough is enough! Kudos to Citizens United for Peace and Stability. Kudos to the organisers and participants of #OccupyNASS. While the scoundrel may not resign as a result of all these, yet the message has been passed. Never again shall we fold our arms and allow scoundrels to exert their deadly stranglehold on us again. Nigeria calls for urgent salvation.

There is ardent need for vigilance on our part. The administration of justice in Nigeria is porous and permissive, hence the total state of chaos and lawlessness that pervades the country. Ricky Tarfa’s case is a mere tip of the iceberg. Saraki’s ominous last sentence in his recent article on his current legal debacle is a cause for concern. He declared, rather pompously, that justice does not end with the CCT. As true as this sentence may be, its meaning within the Nigerian context is very grave. Saraki has been busy shopping around for “justice” even after the uncharacteristic declaration by the Supreme Court that he has a case to answer. And somewhere in this polluted environment may be a willing judge ready to throw a spanner into the gains made so far.

Collectively, we can spend our energies tackling our numerous social maladies and our fumbling attempts at socio-economic development. There is no longer an honourable option for Saraki, he missed that opportunity a while ago. Resignation at this stage holds no dignity. Resignation after conviction equally holds no honour. Impeachment (most unlikely in the present scenario) also would not confer any dignity on Saraki’s exit. But exit he surely must, the end is just around the corner. The overall loser in the whole scenario is no one but Saraki, the author and architect of his own misfortune. Saraki’s tale shall be a reference point for the consequences of uncontrolled greed and ambition. It is a classic case of how not to be a politician.

To Bukola Saraki, this is a real season of anomie, the days and nights of the long knives. These long knives are not borne of betrayal but rather a karmic consequence of faulty upbringing and opportunistic and extremely defective lifestyle with uncontrolled covetousness. His has been a lifestyle devoid of decency and moral scruples. But there is just one favour he can render to Nigeria. This is just to depart at this auspicious moment and allow to direct our energies towards improving our existence and wellbeing.