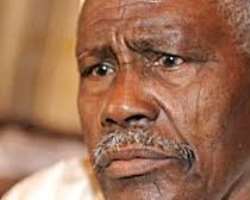 The troops of the Nigerian Army have arrested a suspected Boko Haram member responsible for the murder of Gen. Mamman Shuwa.

The Acting Director, Army Public Relations, Col Sani Usman said that the alleged killer of Shuwa would be paraded to the public by the Commander, 3 Brigade Kano.

It was learnt that the military had been trailing the suspect who escaped shortly after the killing of the general in his Maiduguri residence in November 2012.

It was further gathered that while two persons were apprehended and paraded before the public, the mastermind was not caught until his arrest by troops in Kano today.

Shuwa was the pioneer General Officer Commanding of the 1st Division of the Nigerian Army.

The Acting Director, Army Public Relations, Col. Sani Usman, who announced the arrest of the suspect on whatsapp, said that the Commander of 3 Brigade whose men caught him would address the press on the issue.

He said, “The ever hardworking military intelligence have grabbed the suspected killer of Maj. Gen. Mohammed Shuwa, (retd).