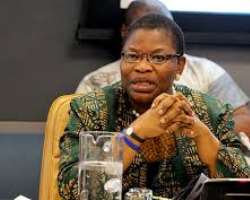 More criticisms are coming against President Muhammadu Buhari’s handling of the economy and security challenges in close to one year of his administration,.

Barely a day after the Nobel Laureate Professor Wole Soyinka delivered a seating critique of the administrations reaction to the rampaging attacks by Fulani herdsmen, another hard knock has come in the area of the economy.

Former Minister of Education, Oby Ezekwesili on Saturday faulted President Muhammadu Buhari's current economic policies, saying that they have resulted in the decline of the country.

According to her, the economic policies are similar to those he promulgated during the military regime he led in the 1980s, which incidentally did not work then and will not work now.

Ezekwesili, who  spoke at a public engagement forum organized by the Covenant Church led by Pastor Poju Oyemade in Abuja on Saturday, .

described  Buhari's economic policies as “archaic” and “opaque”, which  are not only encouraging massive corruption and abuse of power, but also hurting the poor they were intended to help. “During the first coming of this our new president, a command and control economic system was adopted. During that era, inflation spiralled. During that era, jobs were lost. During that era, the economic growth level dipped.

“That era wasn't the best of eras in economic progress. What did not work in 1984 cannot possibly be a solution in a global economy that's much more integrated,” she said.

According to her,  Mr. Buhari is simply rehashing the same “command and control” approach towards economic issues which has left the country's economic indices worse off since he assumed office almost year ago.

She added: “In over one year, the president is still holding to the premise that command and control is the only way out.

She lamanted that just in one year of Buhari presidency,  the country has  lost the single digits inflation status we maintained in past administrations.” She said

Ezekwesili, a former World Bank vice-president,  said Mr. Buhari's distortion of foreign exchange system has hurt the poor it was intended to support the most.

She said, “The president comes into this economic philosophy on the premise that he does not want the poor to suffer. I can relate to that, a leader must not allow the poor to suffer, especially a leader who knows that most of his votes came not from the elite but from the poor.

“The problem though is that the intention and the outcome are diverged. The weakest and the most vulnerable suffer the impact of inflation the most. Enormous power is being abused as a result of opaque economic policies.

“Companies are suddenly finding themselves unable to produce because they're unable to access foreign exchange,” she said.

The former minister enjoined members of Buhari’s economic team to present him with hard facts on the consequences of his debilitating economic policies.

She said, “Mr. President should sit with his team and look at the economic evidence that speaks loudly. It's time to sit back and review the well-intended idea of command and control economic principle.

“He should do what the Americans say that if it ain't broken, don't fix it.”