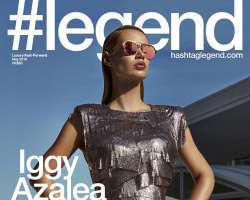 In her chat with the magazine, Iggy talks her rise to fame, moving to the US from Australia, her music, social media and more.

Read excerpts from the interview below:
Coming to the US…
“I always had big aspirations and it seemed illogical to me to take logical steps to achieve something that was so extreme as what I wanted to do. So it wasn't scary for me. I'd be more scared to sit in an office my entire life. Living a life where you almost know what to expect every day scares the shit out of me. Even if I weren't a musician, I don't think I would fit into any traditional work environment.”

Being a role model…
“As a role model, I don't think I'm a great one. But I would let my child listen to my music and I think I'm a cool person. I think I have a good message. I do consider what I do now knowing there are younger people watching and there are things I wouldn't do on stage anymore that I used to do. But I don't sit in the studios wondering what somebody's mom would say about my lyrics.”

On her latest album…
“With The New Classic, I was definitely trying to break into the mainstream and the album included what I thought would be successful and what people would gravitate to. With Digital Distortion, rather than following the trend, I was trying to create my own trend. The intention is, 'hey we live in this digital era, it's really easy for people to distort your character and let the record show, this is my character that can't really be twisted', and I'm trying to sonically give you the vibe of what I would want to represent myself as.”

Read the full interview here .
See more photos from her shoot below!