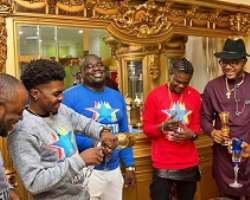 While some records labels in the country might be having various challenges with their artiste, Five Star music record label has continued to remain focus into building a strong and lasting empire of great stars.

The label which house Kcee, Harrysong, and Skiibii, has just invested some millions on a new rapper into their camp named Okafor Golden Chinedu better known as Xbusta.

It was leant that singer, Kcee, had bumped into the young rapper sometime in 2012, in Owerri but lost contact with the singer until their part crossed this year where he was invited to perform at Five Star music festival in Lagos where the label boss, E-money fell in love with his craft.

Xbusta, 22, was a student at Imo state university, Owerri, where he studied Estate Management.