Bindow: The Governor with the Sardauna Style of Leadership 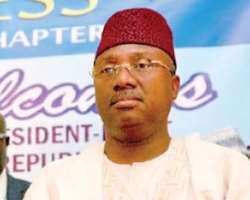 The Word "Sardauna" is a name traditionally turban to people (Leaders) who have positive influence in the life of many other.The name connotes good act of leadership void of all forms of sentiments, bias mind,selfishness and pride.

Before now the mentioning of "Sardauna" is categorically meant for only one Man in the entire Country, it's known to be referred to a Northern Nationalist who had written his name in the Marbles of life, Sir Ahmadu Bello had penned down his indelible name in the ink (Sand) of time only because he positively affected millions of people in Nigeria especially from the Northern extraction.

The dynasty of Sokoto caliphate,traditionally turbaned Ahmadu Bello with the "Sardauna" because of how he laid down his life for the common people, He sacrificed his entire life for those considered to be nothing and without a future and a bright destiny.

"Sardauna" means a Man with a passion of people, a lover of all men,a man who command people by what he does, a man who has sympathy for people he governs and a man who can die for the sake of people.

All these qualities was recently discovered on a Man I call the gentleman Governor,the Sardaunan Mubi, the Social emancipator of the people of Adamawa state,the giant with the strides of great achievements. Call him "Bindow ikon Allah" or senator Muhammadu Umaru Jibrilla, Dan Jibrilla, Dan Albarka.

The Sardauna of our time in Adamawa has proven to be imbibing the acts and threads of the late Sardauna by tirelessly working for the people of Adamawa state with people oriented programs.

Of recent times Adamawa became a leading centre of fast development state by any visitor, where despites dwindling economy of the country and the state,the Sardaunan Mubi judiciously uses the meager resources to better the life of Adamawa people.This prudence attitude has enabled him to do what has not been done in the state for many decades.

Sardauna has began to have people connected agenda and policies, under what he tagged "Bindow For Social Change" (BSC)

Only few Months ago he woos investors to the state to come and generate solar energy which will have multiplier affects on the economy of the state.

Sardauna is now making frantic efforts to commence the production of cements in Guyuk Local Government Area by the Dangote Group who had earlier Survey the entire local area.

By way of permutations BSC will beautify the entire state with good roads agenda before second quarter of next year.

Despite short coming of revenue generation(IGR), he constantly devise means of constant and prompt paying of civil servants.

He makes sure all institutions,schools of various types in the ravaged seven LGs by Boko Haram are fully functional and operational.

He always reassures that Water,Electricity,Health and all problems of LGs staff salaries will soon be a thing of the past as his government inherited a backlog adminstration issues.