Both EFCC, AGF cleared me of bribery allegations: CCT Chairman 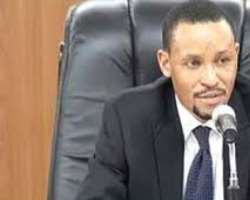 The Chairman of the Code of Conduct Tribunal, Danladi Umar on Wednesday said, contrary to the claim by the Senate President, Dr. Bukola Saraki, the Attorney-General, the Federation and Minister of Justice, Mr. Abubakar Malami, had cleared him of the alleged bribery levelled against him.

Umar said this in response to Saraki's lawyer, Mr. Ajibola Oluyede, while arguing the Senate President's motion asking the tribunal chairman to disqualify himself from further presiding over the trial.

Oluyede anchored the motion on the grounds that there would be a likehood of bias in Umar's handling of the trial because he remained under investigation by the Economic and Financial Crimes Commission for bribery.

Oluyede said the tribunal chairman would be subject to the control of the EFCC since the anti-graft agency was the body that allegedly brought Saraki before Umar for trial.

Umar, however, said he had been cleared of the allegation by both the EFCC and the AGF.

He recalled that upon a petition filed against him before the House of Representatives over the bribery allegation, the AGF (Malami) appeared before a committee of the House and told the members of the committee that he (Umar) had been cleared.

Umar said, “A group called Anti-Corruption Network wrote a petition against me at the House of Representatives. The House committee invited me and I went there three times but the petitioner did not come. I told the committee that what I think should be done and I said if it were to be court, when the person who filed a case refuse to come, the court will strike it out. But the chairman said, let's give them another time.

Why did he not strike it out and decided to continue to wait for the petitioner?

“I went there just because of the respect I have for the institution. I am a law abiding citizen, that is why I went there three times abandoning all my works here.

“They invited the AGF. The AGF went with a copy of the letter of the EFCC and he said by virtue of that letter, nobody could compel him to prosecute me on the basis of that the letter stated that the allegation was based on mere suspicion.

The Federal Government is prosecuting Saraki before the CCT on 13 counts, including allegations of false asset declaration, which he allegedly made while being Kwara State Governor between 2003 and 2011.

Oluyede maintained while arguing his motion on Wednesday that the June 24, 2014 letter by the then EFCC chairman, Mr. Ibrahim Lamorde and which was addressed to the then AGF, Bello Adoke, did not exonerate him of the bribery allegation.

He added that the then AGF had minuted on the letter asking the EFCC to proceed to prosecute the tribunal chairman and the other suspects.

Oluyede maintained that the other report of investigation issued in March 2015 did not also clear the tribunal chairman.

He said it would require the AGF office to issue another letter overriding the earlier directive to the EFCC to go ahead with the prosecution of Umar and his co-suspect, before the tribunal chairman could be said to have been cleared.

He insisted that in as much as there was no fresh letter by the AGF expressly stating that Umar had been cleared of the allegation, “the legitimacy of the proceedings (Saraki's trial) is in question.”

The lead defence counsel, Chief Kanu Agabi (SAN), excused himself from the proceedings shortly before Oluyede moved the application on Wednesday.

Agabi, who though admitted that he only became aware of the application after Oluyede had filed it, said he had no problem with the motion being moved on behalf of the defence team.

He took his leave after advocating peace.
But Oluyede who picked up the microphone as soon as the lead defence counsel left, said in his opening argument on the motion that it was  Agabi who advised the Senate President to file the application.

He said, “Paragraph 15 of the further affidavit confirms that it was, in fact the lead counsel, Mr. Agabi, that advised the defendant to bring this application before the tribunal in the interest of justice.

“The submission of counsel, no matter how esteem that counsel is, does not and is not allowed to be considered as constituting evidence.

“Even if it was true that the lead counsel was not aware or did not even consent or approve it for reasons of conflict, it is immaterial because any counsel that is briefed by a party to a proceeding is entitled to act in accordance to the instruction of his client.”

But the lawyer prosecuting Saraki on behalf of the Federal Government, Mr. Rotimi Jacobs (SAN), said the investigation of the bribery scam had been concluded by the EFCC and that the culpable person had been charged to court.

While opposing the motion, he described as absurd the prayer asking Umar to disqualify himself from the trial.

He said it was absurd that Saraki who was already charged with criminal offence insisted on remaining a senator and asked to be allowed to keep performing the duties of the Senate President while asking the tribunal chairman who was merely investigated and exonerated to disqualify himself from performing his constitutional duties.

“Your lordship has not been charged before any court, no charge has been filed against your lordship. That is the absurdity in their motion.

“This application is only filed to achieve only one purpose, to embarrass the tribunal.”

He said the motion was filed to malign the tribunal chairman, adding that the investigation of the bribery allegation had been concluded and the person found to be culpable had since last year been charged to court by the EFCC.

He said, “If investigation has been concluded and someone is already facing trial, will the defendant be right to say that the tribunal chairman is involved in an ongoing investigation? He cannot be right.

“The investigation has been concluded since March 2015. This is stated in our counter-affidavit which was never challenged. That is what led to the charge he referred to. The person on trial is the only one recommend for prosecution.

“The letter did not recommend your lordship for prosecution. That is not what the letter says. The letter clearly stated with overwhelming evidence the person to be prosecuted. We should fear God, we are counsel.”

Jacobs said, contrary to the claim by Saraki, the EFCC was not a party to the case but that it was the Attorney-General of the Federation that issued him the fiat to prosecute the defendant.

He insisted that the case was filed through the Code of Conduct Bureau and not the EFCC as speculated by Oluyede.

He said by virtue of section 349(7), of Administration of Criminal Justice Act 2015, the Oluyede could not have validly filed the motion without any allusion to the lead defence counsel, Kanu Agabi, who was still representing the defendant in the case.

He reminded the tribunal that the issue of who filed the charges against Saraki, had been argued by Agabi in a motion challenging the tribunal.

He said the issue had become part of the subjects of appeal filed by Agabi against the tribunal's ruling and urged the judge not to make findings on it in order not to run foul of usurping the duties of the appeal court.

The two-man panel of the tribunal led by Umar fixed Thursday for its ruling on the motion after entertaining the arguments for and against it on Wednesday.

The cross-examination of the prosecution's first witness, Mr. Michael Wetkas, by the defence team was to continue on Wednesday, but it was suspended to enable the tribunal to first hear the application asking its chairman to disqualify himself.

If the tribunal rules against Saraki on Thursday, the defence will continue the cross-examination of the witness, but a ruling in favour of the Senate President may bring the trial to a halt.

Earlier in the proceedings on Wednesday, Umar ordered the security details that accompanied Saraki to the proceedings bearing rifles to go out of the court room for “the safety of everybody.”

He also said he would consult with lawyers on both sides of the case on whether the live broadcast of the case should be permitted.