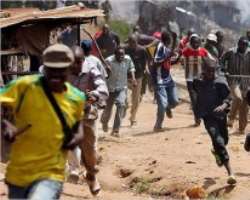 Sources in the area put the casualty figure at 48, though the police is yet to put a definite figure.

Sixty persons reportedly sustained varying degrees of injuries while tens of residential buildings were equally torched, according to sources in the area.

Eye witness accounts had it that the herdsmen in their numbers invaded the community in the early hours of yesterday with guns, bows and arrows, machetes and swords and ensured that any human being within sight was hacked down.

But for the arrival of a combined team of police and military personnel led by the Police Commissioner in the state, Nwodibo Ekechukwu, in the community, the situation would have degenerated and perhaps gone out of hand as they made efforts to repel the attack.

As at the time of filing this report, no fewer than 30 corpses, most of which were recovered from farmlands were said to have been deposited at the Bishop Shanahan Hospital, Nsukka, while intensive search for more bodies are ongoing in the area. Those injured were also taken to different hospitals for medical attention.

A mortician at Bishop Shanahand Hospital who spoke to THISDAY on the condition of anonymity said 30 dead bodies were brought to the hospital this morning with 22 injured persons.

“I also learnt that some dead bodies and other injured persons were taken to other neighbouring hospitals for treatment,” he said.

Despite the presence of security operatives, most villagers have already deserted the community for fear of more attacks by the herdsmen who were said to have made the area an attack centre in recent times.

The spokesman of the police in Enugu State, Mr Ebere Amaraizu, said the Commissioner of Police, Mr Nwodibo Ekechukwu, had already moved to the local government to ensure that normalcy returned.

He said: “The police are aware of the attack in Uzo-Uwani and the state commissioner of police is already there to ensure that the situation is brought under control.

“The police are also collaborating with sister security agencies like the army, civil defence and the Department of State Services to handle the situation.”

The Chairman of Uzo-Uwani local government, Mr Cornell Onwubuya, who also confirmed the incident, regretted that in spite of efforts to stop the crisis through dialogue, the suspected herdsmen had continued to attack the people.

“Yes, there is serious problem in the local government as suspected herdsmen today attacked Nimbo community.

“Information reaching us said many people were killed but I do not know the actual number now.”

An eyewitness who pleaded anonymity told the News Agency of Nigeria (NAN) in Nsukka that the suspected herdsmen numbering up to 300 invaded the community with guns and machetes, shooting sporadically and killing people.

“As they were killing the people, they were also setting houses and vehicles ablaze. Many people have been killed; I do not have the actual number.

“The residents of Nimbo and motorists have fled the community for safety.”

NAN reports that residents of Nsukka wept uncontrollably when the five bodies from Nimbo were being deposited at the Bishop Shanahan Hospital, Nsukka.

A resident, Mr Dennis Ezema, urged the Federal Government to urgently intervene in the activities of the herdsmen before it escalated to a full blown war.

“It is unfortunate that people can be mercilessly killed without human feeling.

“You can see how these people were killed and sliced like bread; people should respect the sanctity of human life.”

NAN reports that scores of the people who fled from Nimbo are now taking refuge in some primary schools in Nsukka. (THISDAY/NAN)