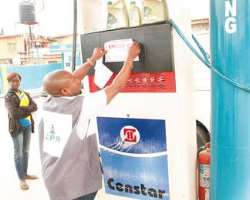 The Department of Petroleum Resources DPR has sanctioned 26 filling stations in Kano State and Jigawa for various offences.

The DPR Comptroller in charge of the two states, Alhaji Isa Tafida, made the disclosure while speaking with reporters in Kano on Monday today, shortly after monitoring fuel sales at some filling stations.

He said that 10 out of the defaulting stations were caught by DPR officials selling petrol at odd hours of the night.

Tafida warned marketers to desist from selling fuel at odd hours or be ready to face severe sanctions.

The DPR chief stressed that pump price of fuel at retail outlets remained N86.50k per litre, noting that any marketer found selling above the approved price would be punished.

It can be recall that supply of petroleum products in Kano and Jigawa has improved significantly, following the efforts of stakeholders.

The defaulting stations were fined according to the magnitude of their offences.