No reprieve yet in sight for 2016 budget crisis, as deadline expires 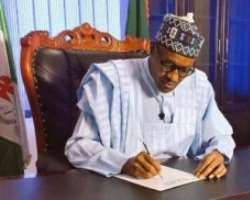 The appropriation bill for 2016 still remains a contentious issue between the presidency and the national assembly as pressures by the Presidency to force the National Assembly to rewrite the 2016 budget and include critical projects left out in the appropriation bill as passed were appears to have hit the brick wall. With another crisis beaming by the corner and the threat of the legislators to veto the president Nigerians are left to guess what the next action will be.

The saga took a new slide with claims by legislators that the budget with the President cannot be rewritten under the law. The legislators have also dismissed calls for a supplementary budget, saying the only option open to the President was to sign what was passed to him and forward an amendment bill on the 2016 appropriation bill to take care of his interests.

The deadline for the President to sign the 2016 budget as presented to him on March 23 passed at the weekend. President Buhari has refused assent to the 2016 budget of the Federal Government upon misgivings that a number of critical projects notably, the Calabar – Lagos rail line, were removed by the Senate and House Committees on Appropriation, led by Senator Danjuma Goje and Abdulmmumin Jibrin respectively.

The standoff has led to pressures on the National Assembly to withdraw the budget transmitted to the President on March 23 and incorporate the projects. In the face of that pressure, senior officials of the National Assembly disclosed that the constitution did not provide a leeway for rewriting a budget that had already been passed.

The complexity is further worsened by constitutional provisions which give the President a maximum of 30 days to give his assent to the budget bill. Section 59(4) of the Constitution demands that where the President refuses to sign the appropriation bill within 30 days, the bill should again be presented to the National Assembly sitting at a joint sitting.

There was controversy among constitutional experts in the National Assembly at the weekend as to whether the President is expected to re-present what was passed or present a fresh bill to satisfy his interest on the issues at hand.

At the mean time, a meeting between the Presidency and the National Assembly leadership, expected to hold at the weekend to address the issues of concern, did not hold, as disclosed by close sources.

However, chairmen of Appropriation Committee of the National Assembly, Senator Danjuma Goje and Abdulmunin Jibrin, on Sunday, stated that in a bid to move Nigeria forward, both committees would resolve all grey areas raised by the executive arm of government. This new move is contained in a statement they jointly signed, insisting that they worked on inputs supplied by the committees.

The statement, entitled: “Budget 2016: A time for Statesmanship”, read in part: “Following the transmission of the 2016 appropriation bill and details passed by the National Assembly, there have been all manner of misinformation, misrepresentations and innuendos about the roles played by the Joint Committees on Appropriation in the course of passing the budget. “Even though most of the allegations, especially those specifically levelled against the two of us, as chairmen of the committees, are unfounded, we intend to respond to them at the appropriate time. “For now, what we consider important is to resolve the impasse around the budget and get it assented to so that its implementation can begin in the interest of all Nigerians.

“However, we must put it on record that the details aggregated and transmitted to the executive are largely the inputs we received from the standing committees of both the Senate and the House of Representatives. “Given the foregoing, and all factors considered, we hereby state that we have had enough controversy over the 2016 budget. “What is needful right now is a resolution of the differences and to that end, we call on our colleagues in the National Assembly to accede to the request by His Excellency, President Muhammadu Buhari to have a second look at the details and make the necessary adjustments so that he can assent. This, in our opinion, should not go beyond this week.

“To the extent that there are already ongoing consultations, a debate about who is right or wrong is unhelpful in the circumstance; and in any case, does not advance the cause of our country men and women whose interest we have been elected to serve.”