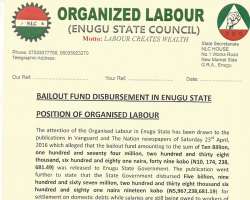 Workers of Enugu State under the auspices of the Organized Labour comprising the Nigeria Labour Congress (NLC), the Trade Union Congress (TUC) and the Joint Public Service Negotiating Council (JPSNC) have debunked the media report credited to the Independent Corrupt Practices and other Related Offences Commission (ICPC), alleging that the state government misapplied the Federal Government bailout fund for the liquidation of outstanding salaries and pensions of the public servants in the state.

They said that 'Governor Ifeanyi Ugwuanyi from on the set involved the Organized Labour in the management of the sum of four billion, two hundred and seven million naira (N4,207,000,000.00) being the actual bailout fund approved for the State for the settlement of outstanding salaries and pensions of the public servants', stressing that the state government did not misapply the fund as was wrongly reported. The Independent Corrupt Practices and other Related Offences Commission (ICPC) had listed Enugu State in the national dailies among the states that allegedly misapplied the Federal Government bailout funds loan meant to offset backlog of workers' salaries and pensions.

But reacting to the allegation, the state chapter of the Organized Labour in a statement jointly signed by Comrade Virginus C, Nwobodo, Chairman, NLC; Comrade Igbokwe Chukwuma Igbokwe, Chairman, TUC/JPSNC and Comrade Theo. O. Obasiani, Secretary, JPSNC, described the allegation by ICPC as 'false and misleading' and a 'deliberate attempt to instigate workers and good people of Enugu State against the State Government as well as tarnish the good image of the State.'

According the statement, 'the Organised Labour in Enugu State is seriously embarrassed by the false, unfounded and malicious publication purported to have emanated from the office of the Independent Corrupt Practices and other Related Offences Commission (ICPC).'

While expressing its satisfaction with the management of the N4.207 billion bailout fund for payment of arrears of pensions and salaries, the Organized Labour noted that it will continue to partner the State Government for good governance and sustainable development of the state.

Meanwhile, the Enugu State Government through its Secretary to the State Government, Elder Gabriel Ajah, had earlier denied the allegation of misapplication of the bailout fund for the liquidation of outstanding workers' salaries and pensions, and presented a detailed account of how the fund was disbursed so far for the purpose it was meant for.