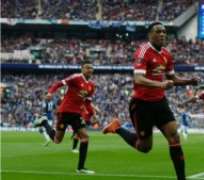 Anthony Martial struck in stoppage time to send Manchester United in to the FA Cup final with a 2-1 win over Everton, capping a miserable week for the Merseyside club.

Roberto Martinez’s team were much improved from the midweek derby rout they suffered at the hands of Liverpool but Martial ensured there will be no let-up in the growing pressure on the Spaniard.

David de Gea’s magnificent penalty save from Romelu Lukaku, who missed a host of opportunities on an afternoon to forget, seemed to galvanise Martinez’s men, who dominated the closing half an hour and deservedly equalised through a Chris Smalling own goal.

But Martial had one more act of livewire brilliance up his sleeve as he darted in-field and collected a scrambled return pass from substitute Ander Herrera to fire past Joel Robles and give Louis van Gaal the chance to lift United’s first FA Cup since 2004.

Captain Phil Jagielka and John Stones were passed fit to start at the heart of defence for Everton and the latter made a vital early challenge to deny Martial, after the United forward burst into space behind makeshift right-back Muhamed Besic.

Lukaku found himself through on goal in the fifth minute but a heavy touch forced him to go around De Gea and Wayne Rooney – deployed once again in a midfield role – got back to clear off the line.

United had the upper hand though and, after Martial and Marcus Rashford went close, Fellaini opened the scoring in the 33rd minute.

Rashford stole in ahead of Stones and held up play to find Martial, allowing the Frenchman to torment Besic once more and Fellaini arrived to convert the cross left footed.

Rashford and Martial combined once more nine minutes into the second half, with Jesse Lingard skewing wide on the end of crisp backheel.

But another United youngster to have impressed over recent weeks had a moment to forget in the 56th minute.

Lukaku became the architect as he linked up with Ross Barkley, who was brought down in the box by Timothy Fosu-Mensah.

The upshot was more misery from Lukaku as his well-hit spot-kick was saved by De Gea, who sprung to his right and threw out a strong hand.

Lukaku’s toil continued as he headed over, but Martinez replaced Aaron Lennon with Gerard Deulofeu in the 70th minute and was rewarded soon after – the winger’s low cross intended for Lukaku diverted into his own net by a lunging Smalling.

De Gea saved from a rampaging Deulofeu but Lukaku could not tap into his team-mates’ renewed confidence as he wasted two more chances.

And the clinical Martial made sure he would regret his wastefulness, with United booking a final date with either Watford or Crystal Palace.

Key Opta stats: – Romelu Lukaku has missed his last two penalties for Everton after scoring his previous five for the club. – Anthony Martial has been involved in 21 goals for United this season, registering 14 goals and seven assists in all competitions.- Marouane Fellaini has scored two goals in five FA Cup appearances this season – double the amount he’s scored in the league (1 in 17 apps). – Chris Smalling scored his first own-goal since April 2010 (all comps), when he did so against Everton while playing for Fulham.