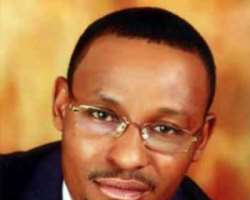 Nigerians were treated to a melodrama  at the Thursday session of the daily trial of Senate President Bukola Saraki, who is facing trial before the Code of Condut Tribunal over an alleged false declaration of assets .

The dramatic conflict was triggered by Chairman of the Code of Conduct Tribunal (CCT), Hon. Danladi Umar, when asked security operatives to throw out one of Saraki's lawyers, Raphael Oluyede, for talking back at him.

The causative factor was the refusal of Umar to entertain  an application by Saraki asking him to withdraw from his trial over an alleged bias.

Umar threw away the application, saying:  “That motion as far as the tribunal is concerned is of no consequence; not worthy to be entertained and is hereby thrown away,” said Mr. Umar.

Oluyede had earlier brought to the attention of the court the motion filed on Wednesday, April 20th, 2016, seeking the CCT boss to disqualify himself from participating in the trial based on bias.

Saraki’s lawyers had in the motion submitted  that the continued presence of Umar on the panel of Tribunal offended the provisions of Section 36(1) of the Constitution of the Federal Republic of Nigeria, which prescribes that “In the determination of his civil rights and obligations, including any question or determination by or against any government or authority, a person shall be entitled to a fair hearing within a reasonable time by a court or other tribunal established by law and constituted in such manner as to secure its independence and impartiality”.

It was when  Oluyede attempted to bring up the motion, that the trouble broke loose.

Justice Umar repeatedly yelled at him to “Sit down,” but  Oluyede insisted on being  heard.

It was at that point that Umar, who was palpably angry,  called for police officers to throw out the counsel to the Senate President.

But  Oluyede intent on pressing his legal privileges  sat down on arrival of the police officers and maintained that he would not be intimidated.

It took the intervention of the  prosecution counsel, Rotimi Jacobs, who pleaded with Mr. Danladi,  to calm the troubled waters.