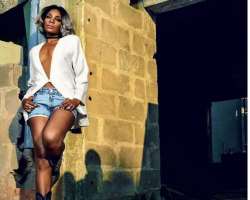 BEVERLY HILLS, April 20, (THEWILL) – Seyi Shay has landed in yet another controversy after she made a really terrible blunder on TV.

With fans yet to forgive her for Tiwa Savage comment or the one about Amber Rose, she once again makes another gaffe during an interview on HipTV's Trending.

Asked by the show host, Nancy Isime to reveal the meaning of 'E.P', you won't believe what she said… Now for those who would really like to know, E.P is a musical term meaning Extended Play, a musical recording that contains more than one single but not enough to make a full studio album.

Fans have come for Seyi for this error which they feel is unforgivable seeing as she's a professional artiste.

As for us, we choose to believe she was joking…