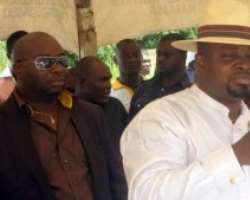 A top aide to former Nigerian President Goodluck Jonathan was arrested by the country's anti-corruption agency on Monday.

Waripamowei Dudafa, who served as a special assistant on domestic matters to Jonathan, was picked up by agents of the Economic and Financial Crimes Commission (EFCC) at the Murtala Mohammed International Airport in Lagos, Nigeria's Premium Times reported .

Nigeria's former national security advisor, Sambo Dasuki , was arrested in December 2015 on charges of fraud and money laundering, which he denies. Dasuki allegedly distributed the funds among members of the Peoples' Democratic Party, including Dudafa, for use in campaigning ahead of presidential primaries in December 2014. Muhammadu Buhari of the All Progressives Congress defeated PDP candidate Jonathan in the March 2015 general election.Dudafa was wanted by the EFCC for his alleged involvement in an arms scandal in which $2.1 billion of government funds earmarked for fighting Boko Haram was diverted by government officials.

Newsweek contacted the EFCC for confirmation of Dudafa's arrest but received no immediate reply. There is no suggestion that Jonathan did anything wrong and the former president has not been charged by the EFCC.

President Buhari has made tackling corruption a focus of his administration since his inauguration in May 2015. Endemic corruption costs the West African country millions of dollars per year, with Nigerian Information Minister Lai Mohammed saying in January that the country lost of 1.34 trillion naira ($6.8 billion) in public funds between 2006 and 2013 at the hands of just 55 individuals, including government ministers and bankers. NEWSWEEK