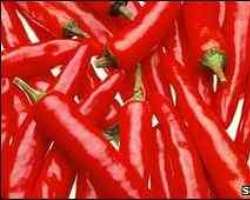 Studying chilli peppers is helping scientists create a new type of painkiller which could stop pain at its source.

A team at the University of Texas says a substance similar to capsaicin, which makes chilli peppers hot, is found in the human body at sites of pain.

And blocking the production of this substance can stop chronic pain, the team found.

They report their findings in the Journal of Clinical Investigation.

Capsaicin is the primary ingredient in hot chilli peppers which causes a burning sensation.

It does this by binding to receptors present on the cells inside the body.

Similarly, when the body is injured, it releases capsaicin-like substances – fatty acids called oxidized linoleic acid metabolites or OLAMs – and these, via receptors, cause pain, the researchers have found.

Blocking pain
Dr Kenneth Hargreaves, senior researcher at the Dental School at the University of Texas, and his team next set out to see if they could block these newly discovered pain pathways.

Lab work on mice showed that by knocking out a gene for the receptors, there was no sensitivity to capsaicin.

Armed with this knowledge they set about making drugs to do the same.

Dr Hargreaves said: “This is a major breakthrough in understanding the mechanisms of pain and how to more effectively treat it.

“We have discovered a family of endogenous capsaicin-like molecules that are naturally released during injury, and now we understand how to block these mechanisms with a new class of non-addictive therapies.”

Ultimately, he hopes the drugs will be able to treat different types of chronic pain, including that associated with cancer and inflammatory diseases such as arthritis and fibromyalgia