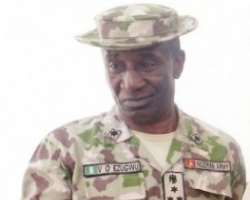 The Nigerian Army on Tuesday confirmed an ambush on the convoy of the acting General Officer Commanding (GOC), 7 Division, Brigadier-General Victor Ezugwu in the restive city of Maiduguri.

Spokesperson for the Army, Col. Sani Usman, said in a statement that the ambush occurred in Bama at 8:30 a.m while the military chief was on his way to visit troops location in the area, according to Xinhua.

Usman said although one soldier was killed and two others got injured, the troops were able to survive the ambush, killing some of the Boko Haram terrorists in the process.

He said a Toyota Hilux vehicle and some weapons were recovered from the terrorists.

The spokesperson said the acting GOC had since continued his operational visit to Bama, while the body of the late soldier along with the wounded soldiers had been evacuated to Maiduguri.

Usman said the Nigerian Army remained committed and determined to continue to clear the remnants of the Boko Haram terrorists from the area.

Suspected terrorists on Monday attempted to enter the 113 battalion headquarters located at Kareto in an early morning attack.

Troops of the 113 battalion, with aerial support from the Nigerian Air Force, successfully repelled the attack on the town and the battalion headquarters.

The military had recently cleared many hideouts of the insurgents in Borno, Yobe and Adamawa including their purported spiritual headquarters at the Alagarno forest