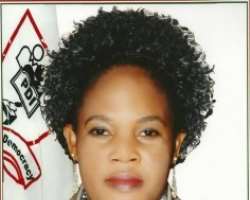 The main opposition Peoples Democratic Party, PDP, Tuesday night, announced the shutting down of its official and verified Twitter handle, @PdpNigeria, citing recent activities on the handle as reasons.

Head of PDP Publicity Division, Chinwe Nnorom, who made the announcement in a statement via the PDP's Facebook page said the general public would be informed of a new twitter account soon.

The terse statement read: 'The general public may wish to recall that the official twitter handle of our great Party, the Peoples Democratic Party, @PDPNigeria was compromised sometime last year and a statement was issued to that regard to alert unsuspecting members of the public.

'However, in view of the recent activities on the handle, I have been directed again to emphasize the shutdown of this twitter account.

'All tweets and any communication from the handle @PDPNigeria does not represent the views of the Party forthwith. We will inform the general public of a new twitter account soon. Thanks for your understanding.'

However, as at the time of filing this report, Vanguard check on the PDP handle, Tuesday night, revealed that the last tweet activity was recorded at about 5pm.

Nnorom did not however state the manner of activities that made the party shutdown its official Twitter handle.